There's A War Going On Outside No Man Is Safe From 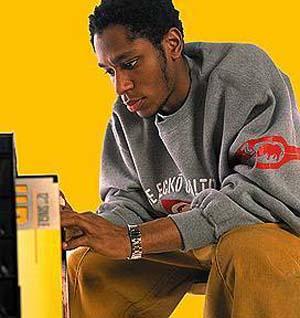 As the heat index rises, so does the tendency for human aggression. In other words, it seems that most of us are pretty irritable and pissed off when it's really hot outside. In the hip hop world, this summer has produced its fair share of beef amongst various artists---an intense mixture of genuine conflict and industry-generated media hype. Here are a few very recent examples:

Nas has a new track dissing 50 Cent. If you haven't copped it yet, it's still available on Soul Sides: http://soul-sides.com/. I find myself really diggin' the overall sound, but as O. Wang points out, the lyrical darts Nas throws on this track are relatively dull in comparison to the somewhat sharper battle skills he displayed on "Ether".

Mos Def performed at the Hollywood Bowl last Sunday night in the third of six concerts planned for KCRW's World Festival 2005 series. The MC finalized his set by doing a song he dedicated to Voletta Wallace and Afeni Shakur (if you don't know, I'm not telling you). Much to everyone's surprise, Mos stepped out to the front of the stage during the performance, shouting, "Tell them who shot my man, Suge. Who shot Biggie, Pac and Jam Master Jay?". After repeating his question several times, Mr. Def reportedly stated, "We fear nothing". I have the utmost respect for his courage in challenging Suge Knight----but truthfully, even if he isn't afraid, I'm still kinda scared for him. Read more here: http://www.dailybreeze.com/today/articles/1734242.html.

Rosie O' Donnell supposedly has beef with her neighbor, P. Diddy. On her website, Rosie complained that Diddy's cacophonous 4th of July celebration frightened her children and made them cry.

After viewing a video by Young Jeezy on 106 & Park, DMX referred to the rapper as "Young Cheezy". As usual, no one's sure if he was serious, or just confused.

The Game allegedly spit on a fan during a recent show in the UK. He supposedly became angry when the kid started yelling "50 Cent" and "G-Unit" during his performance.

On a different note, if you are a fan of old school R n'B and soul music, you might want to check out Jaymack. He has beatdowns and beatmixes of blended classics available for free download, and they're actually rather impressive. For those of you who are familiar with Cosmo Baker's recent effort, Love Break, Jaymack's mixes are in a somewhat similar vein (just slightly more amateuristic). Download Jaymack mp3s here: http://www.soundclick.com/bands/7/jaymack_music.htm. If you've been napping through Cosmo's entire career, you can finally see the light here: http://www.cosmobaker.com/.

For my part one and all must browse on this.