Sometimes Your Words Just Hypnotize Me 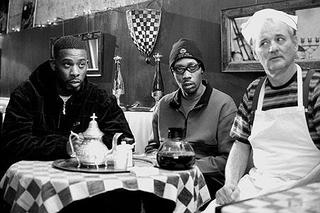 This photo is from one of my favorite movie scenes of all time---RZA, GZA and Bill Murray's oddly brilliant segment in Jim Jaramusch's film Coffee and Cigarettes. If you're interested in what RZA has been up to lately, here is a link to a recent interview with Tavis Smiley: http://www.pbs.org/kcet/tavissmiley/archive/200506/20050616_transcript.html#2. RZA mainly talks about his forthcoming projects in film, the current state of the hip hop industry, and his book (The Wu-Tang Manual). You can read for yourself, though, to find out the story on "Toon Time with RZA".

There's a movie currently in the works about the life of Christopher Wallace (aka the Notorios B.I.G.). Cheo Hodari Coker was the last person to interview Biggie before he was murdered, and has been granted the honor of writing the screenplay for the film. Coker also authored a biography of Big Poppa called Unbelievable: The Life, Death and Afterlife of the Notorious B.I.G., but the movie will not be based on the book. Instead, Coker is planning to depict Wallace's life story based on personal accounts by his family and close friends. Voletta Wallace will act as producer, and Antoine Fuqua (Training Day) is scheduled to direct. Start praying now that P. Diddy won't be allowed to produce the soundtrack. More info here: http://aolsvc.news.aol.com/movies/article.adp?id=20050720043009990006.

Finally, Science Magazine has published the 125 most important questions facing scientific research in the next quarter-century. After reading this list, I found that some of these queries are pretty damn important...i.e. "how can we replace cheap oil...and when?". However, some of the other questions plaguing scientists don't quite seem as critical to me. Are we really pressed to find out if a Hodge cycle can be written as a sum of algebraic cycles? I'm not a scientific expert though (are you surprised?), so maybe I'm too uneducated to value the significance of that information. All I remember about my primary education in science was poking the girl in front of me with my No. 2 pencil, so please forgive my ignorance. Peep Science's list here: http://www.sciencemag.org/sciext/125th/.
Posted by Scholar at 10:33 PM