I'm Your Chief, Your Leader, Your President--- Bitch 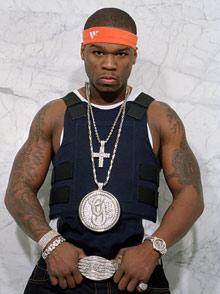 So now that I've attempted my subversive plot to humanize my readership, my mind has been free to wander back into the realm of the intriguingly absurd. This led me directly to my man, Alex Chiu. This unparalleled genius has invented an Immortality Device, and made it possible for you to purchase everlasting life right off the internet. For those of you who are wondering if that's Mr. Chiu's picture I posted, no----that's 50 Cent, you dumbass. Anyway, I still can't quite figure out exactly how this whole things works scientifically. His theory is based on some shit about magnets, electric currents and blood circulation. Hell no, I didn't read the whole thing, and you shouldn't either. This dude is just eerie. After about 7 1/2 minutes on his site, I felt like he was eating my brain. Anyway, if you're interested in buying this device, your money is completely refundable within 90 days. I'm not sure how you know if your Immortality Device is in working order or not within that time frame, but I guess if you're dumb enough to believe this crap, it just might make sense to you. If you have any concerns about what life will be like in the future, Chiu can explain that, too. Yes, he's also blessed with the gift of prophetic wisdom. When his invention becomes accessible worldwide, things are going to get pretty fuckin' weird. No one will need to have children, because if you don't grow old, you never have to birth something just so it will be around to take care of you when you're old. At the very least, you can keep partying for like 400 years, and then settle down and have a kid. He also envisions other weird stuff like robots doing all of the farming in the future, inside of giant skyscrapers. Does this sound utopian to you? Are you ready to go see this yet? Okay, but don't blame me if you end up paying $105 for some Eternal Life Foot Braces: http://www.alexchiu.com/

So, what does 50 Cent have to do with anything? First of all, if you haven't seen Stewie on Family Guy dissing 50's grammar skills, you should really check it out here: http://www.dailyhaha.com/_vids/Stewievs50cent.htm

Secondly, Dominic Tocci did an animated parody of 50's song and video for "P.I.M.P", starring none other than George W. Bush. I don't want to spoil it by giving away too much. Just don't sleep on this one: http://www.kizash.com/films/1001/138/
Posted by Scholar at 1:08 AM