Reality Is A Crutch For People Who Can't Cope With Drugs 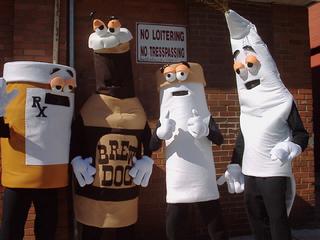 Wasn't it generous of the Good Time Party Squad to take a moment away from terrorizing Courtney Love, DMX and Rush Limbaugh to pose for this dysfunctional family photo? While these friendly little characters are rather commonplace in everyday society, we've all known someone who gets high (or at least altered) by doing something pretty strange. I used to have a neighbor who would drink just enough Drano to get "a little fuzzy". Then there was the secretary in intermediate school who I once caught sniffing white-out on the playground. Come to think of it, I can actually think of quite a few examples. However, I probably shouldn't reveal any more----I can't afford to be liable for any potential mishaps amongst my less intelligent readers.

Hmmm.....okay....okay.... you talked me into it. I will tell you about one more really weird way to get high. Just promise that you won't try this at home...or even at your dumb-ass friend's house.

So here's the story. Around 1962, some Dutch guy named Bart Hughes began developing higher consciousness theories. He had started doing marijuana, mescaline and LSD a few years prior, and literally became addicted to finding the mechanisms at work during drug-induced experiences. Through his experimentation (which often involved standing on his head for long periods of time to catch a buzz), he stumbled upon the ultimate way to stay high permanently: trepanation. For those of you who are blissfully unaware, trepanation is a procedure that's been done since ancient times, and involves a hole being bored into the skull of a patient. The reasons for doing this operation have varied widely throughout history. The "surgery" has commonly been used to let out demons, relieve pressure in the brain cavity, alter personality, etc. Hughes was seemingly the first person, however, to record his hypothesis about the procedure's potential for inducing a never-ending high. He was apparently quite anxious to test his theory, but to his dismay, he could not find a surgeon to aid him in his quest. Eventually he grew tired of waiting, and bought a dental drill to do the job himself. Afterwards, as he prophetically predicted, he was permanently fucked up.

As frighteningly typical as this sounds, Hughes actually had a handful of disciples. One of them was Joseph Mellen, an English attorney who was also an accomplished poet. Mellen wrote a book entitled Bore Hole, which he described as "the story of how I came to drill a hole in my skull to get permanently high". A second convert, Amanda Fielding, was present when Mellen attempted to carve out his third eye with a metal spike. When his first attempt failed, Fielding assisted him with the operation. Mellen reported a sense of well-being afterwards, but still made a final attempt with a drill to maximize the results.

Not surprisingly, Amanda Fielding eventually followed suit. Taking the process a step further, she documented her surgery on film in the cinematic classic Heartbeat in the Brain. She later crusaded for trepanation rights, firm in her belief that it should be legal to have the surgery performed by a professional doctor in a medical setting. At one point, she was scheduled to be interviewed on 60 Minutes, but the show was never aired due to fear of the public's reaction. As far as I know, Fielding doesn't do much in the way of media promotion these days. She and Joseph Mellen got married (in hole-y matrimony) and had 2 1/2 kids and a white picket fence. Their research has been largely ignored by the mainstream scientific community, and therefore has never been definitively confirmed nor denied.

But here's my particular spin on the subject----no matter what, is there any way you could be more pathetically desperate to get high than to put a fucking gigantic hole in your head? If anyone can think of a more absurd way to get stoned into infinity, I'd truly love to hear it.

In case you'd like to be somewhat of an expert on this subject, here is some very informative linkage:http://www.ambient.ca/bodmod/hole.html
Posted by Scholar at 10:01 PM

I got my first electronic cigarette kit at VaporFi, and I think its the best kit.