How Will You Spend Eternity---Smoking or Non-Smoking? 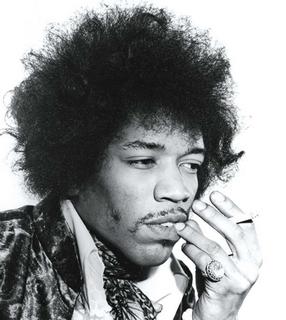 Today I was wandering aimlessly around the internet, and I ended up finding a really weird site about dead rock stars. There are 321 musicians listed, all of whom died earlier than their projected expiration date. According to the calculations done on this site, the average American lives 75.8 years, while rock stars (on this particular list) only lived an average of 36.9 years. The usefulness of this data is suspect for a couple of reasons. In the first place, all of the musicians listed died in 1997 or before, so the information isn't very up-to-date. Secondly, this site has a serious fundamentalist religious agenda. You see, the point they're trying to make with this statistical nonsense is that rock stars are all evil bastards, destined to burn in the fiery depths of hell. The top of the page contains an ominous quote from Proverbs: "The fear of the Lord prolongeth days, but the years of the wicked shall be shortened". I guess these idiots failed to realize that not only rock stars die young---so do children with diseases, and countless other innocent people every day.

Anyway, they have a whole series of Bible verses that they believe can justify their claims---and then you, the reader, have to make the ultimate choice. You must decide between Life and Death. I, of course, tried both options. Depending on my mood, I can go either way. If you choose Life, it tells you how to get saved. If you choose Death, you are told that you're rejecting Jesus. You get one final chance to redeem yourself and choose Life----if you don't, you go to Hell. Seriously. Follow the pathway of the wretched yourself, and just see what happens: http://www.av1611.org/rockdead.html

This religious propagada is made possible by Dial-the-Truth Ministries, whose history and mission are also explained on the site. Apparently, the founders of this ministry realized that they didn't know where to find the people most in need of conversion---you know, like satanists and gay people. They decided that even though they couldn't possibly talk to certain kinds of sinners face-to-face, they could still redeem their souls by generating a phone number people could call to hear a message of salvation. It's not toll-free though---you've gotta pay up if you want Jesus to reach out and touch you.

Ugh---this kind of bullshit is what totally sucks about organized religion, as far as I'm concerned. I mean, this sort of has the opposite effect on me than what they intended. If what they say is true, then the illest live show ever is happening in Hell. You'll never meet Tupac, Biggie, or Jam Master Jay if you stay on the straight and narrow, but you might get to see Bob Hope. Great.

Both Eminem and Shock G announced plans to retire this week. Someone must have hipped them to this website....and now, quitting the game is the only possible way they can see to save their wicked souls. Read about Em's retirement here: http://www.billboard.com/bb/daily/article_display.jsp?vnu_content_id=1000980248, and Shock G's here:http://www.thuglifearmy.com/news/?id=1655.
Posted by Scholar at 2:07 AM

Your blog makes me laugh every day. Keep this up cuz I count on it.