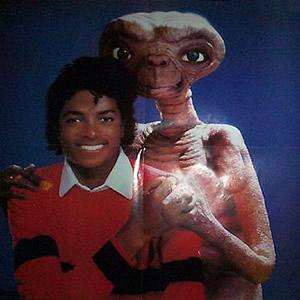 Isn't this picture fabulous? I mean, things were so much better for Michael back when this photograph was taken. He hadn't become an ugly white chick yet, and E.T. is ever-so-much sexier than Debbie Rowe could ever hope to be...

As uniquely bizarre as he is, The Gloved One is apparently not the only celebrity to have close ties with the alien world. According to Michael Luckman, author of the new book Alien Rock, there are quite a few famous musicians who have reported being contacted by aliens and/or spotting UFOs. Jerry Garcia, Sammy Hagar and Ace Frehley of KISS have all had the pleasure of meeting an extraterrestrial. John Lennon, David Bowie, Jimi Hendrix, Mick Jagger, Sting, Marilyn Manson, and a host of others claim they have seen a UFO. The title of today's post is actually a lyric from Lennon's song "Nobody Told Me", which touched on this very topic ("everybody's flying and never touch the sky/ there's UFOs over in New York and I ain't too surprised).

Luckman's most fascinating assertion is that Elvis Presley believed that he was from "a blue star planet". Supposedly, Elvis fancied himself to be rather skilled at levitating household items, particularly ashtrays. This sounds pretty unbelievable, but if Elvis was an alien, that could explain a few things. It could help us to understand his daughter's seemingly inexplicable attraction and subsequent close encounter with Michael Jackson's kind. It also might help me forgive him for those tacky-ass shiny suits. The shitty part is that this means beings from other planets could be just as bloated, sweaty and obnoxious as most of the people here.

Interestingly, Luckman eventually settles upon the conclusion that "UFOs are drawn by music". I think some serious drug action is a more likely common denominator, but once again--what the hell do I know?