Casting A Shadow Of Doubt On Recent Jesus Sighting 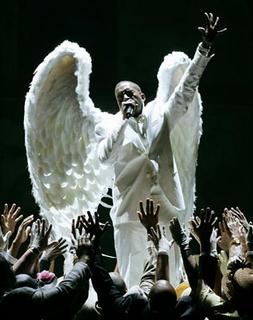 So last Wednesday, a woman in East Chicago, Indiana saw the shadow of Jesus on the side of a tree. Since then, more than 250 people have come to behold this unearthly sight. On Friday night, several people were arrested when a huge fight broke out amongst the tree's visitors. As a result of this incident (as well as other problems such as blocked traffic), city officials and local police have become very concerned about the volume of people who are congregating in the area. Since the image of Christ is only visible at night when a nearby streetlight is illuminated, the powers-that-be had no choice but to turn off the "Jesus light". Now don't get me wrong--I have much respect for people's religious beliefs, no matter how misguided or bizarre. As long as you don't try to convert me to your way of thinking, we're still friends. However, I have to say, I think this shit right here is inexcusably insane.

I remember seeing an article when I was a kid about some lady in a trailer who swore Jesus was on the side of her Frigidaire. So what in heaven would possess Jesus to project his image onto the side of some redneck's fridge? That disturbed me then, and I guess it still does. And why is he now hanging out on the side of a tree? Don't you think Jesus would be pretty sick of the whole wood thing by now? He spent years laboring as a carpenter, was crucified...isn't that enough reason to be a little phobic about trees?

Since this is a shadow we're talking about, are we sure that it isn't like Axl Rose or something instead? It might even be one of the dudes from Metallica...one can't say for sure. I wouldn't even be surprised if a Jesus hand puppet was somehow involved. No matter what the explanation is, these people need to get their shit together. I'm sure that Jesus would be just thrilled that people are beating the hell out of each other in front of his shadow.

Ever since my last post, I've been contemplating whether or not there are any books that I consider harmful. The one thing that came to mind was that religious texts have incited more war, hatred and intolerance than anything on that ridiculous list. Stuff like this just seems to further prove the point that violence and religion are forever happily married.

If East Chicago can't resolve this whole dilemma, maybe they should call in Kanye West. I mean, he and Jesus go walking together on the regular. He may be the only one who can talk Jesus off the side of the tree. If you have any better ideas, let me know. In the meantime, you can read more about this phenomenon here: http://www.washingtonpost.com/wp-dyn/content/article/2005/07/11/AR2005071101182.html
Posted by Scholar at 11:03 PM