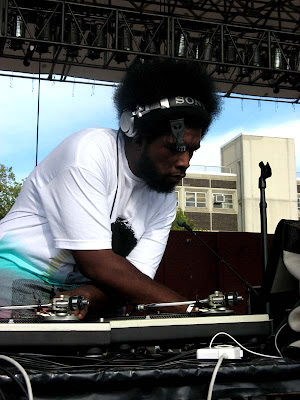 "The Show" ---The Roots
In 1997, Priority Records released a compilation called In Tha Beginning...There Was Rap. The LP featured a collection of old school hip-hop tracks covered by a variety of rappers who reigned supreme in the mid-nineties. It could have been an ingenious idea (at least from a marketing perspective), but for the most part, the results were pretty damn disappointing. Sean Puffy P. Diddy Combs could have kept his version of "Big Ole Butt", and Coolio's take on "Money (Dollar Bill Y'all)" was equally unnecessary. That said, I always thought that The Roots actually did a pretty tremendous job covering "The Show", a classic hip-hop joint that was originally recorded by Slick Rick and Doug E. Fresh. Hear how The Roots flipped the joint, but be sure to pay respect to the architects by checkin' this video of Rick and Fresh performing a live medley of their tracks.

"Best Part"---Self Scientific
I'm sure that a lot of the hip-hop fanatics in the house are already somewhat familiar with this L.A. duo. Chace Infinite and DJ Khalil may not have gotten much respect when it comes to commercial success, but the consistent quality of their musical efforts has helped them become an essential component of hip-hop's underground for the past several years. "Best Part" is one of my favorite joints from their 2001 LP, The Self Science. Although Chace's rhymes tend to be more thoughtful than the garbage a lot of MCs are spitting these days, it's the production that succeeds in making this track so dope. Khalil killed it, resuscitated it, and laid it to rest all over again with this beat.

"Drunk Man"---Eddie Harris
This tune is perfect for the early morning hours when I'm up smoking one last cigarette before I drag my tired and intoxicated ass to bed. If you give this a listen, maybe you can relate. Eddie played several instruments, but was mainly known as a jazz tenor saxophonist. He released some popular records during his lifetime (1934-1996), but his experimentation with various styles and uncanny sense of humor sometimes caused critics to be skeptical of his work. Don't let that scare you away---this track should give you an idea of what an innovative and electrifying musician he truly was. More info about Harris' legacy can be found here and here.

"Street Of Tears"---Black Heat
Black Heat was a '70s funk group who briefly recorded for Atlantic Records. They only had one song that cracked the R&B Top 50 ("No Time To Burn"), so their music has become somewhat of an obscurity over the years. Sampling artists have sought out their infectious rhythms and grooves fairly often, however, especially their track "Zimba Ku", which has been utilized on joints by Eric B & Rakim, NWA, Kool G Rap, Souls Of Mischief, Pete Rock, People Under The Stairs, and more. "Street Of Tears" is more of a soulful ballad than a funk jam---you may recognize that 9th Wonder flipped it on "3:16" by Murs. Interested peoples may want to start with a "best of" compilation of the group's recordings called Declassified Grooves.

Nice selection of tracks here, scholar. That Self Scientific joint was something that I almost sold back the same day I bought it, but after a few listens, I'm glad I didn't. Great post!

love the Eddie Harris cut. I kinda prefer Harris & McCann's version of "Compared to What"... he was phenomenally gifted.

Also, great call on Black Heat. Did not previously make the connection to Murs/9th Wonder until now.

Like you commented at my place, bring on the E McD! That "Supermarket Blues" cut appears on a Madlib comp from way back in the way... pure fucking groove. His voice is like silk.

Great tracks as always Scholar. I especially liked the "The Show" cover (complete with the kazoo) and the Eddie Harris tune. I always thought I was a fan of Tom Waits, turns out I was a Harris fan just waiting to hear him. Cheers.

flood---I've actually learned over the years to hold onto records I don't like that much, for the very reason you mentioned. I expect music to hit me like a freight train on first listen, but sometimes the "creeper effect" is undeniable.

JT---I agree w/ you about Harris & McCann's version---it's far superior to most renditions I've heard. I want to post Flack's cover at some point, however, because I've just discovered her first LPs within the last year or two. I always thought of her as being the queen of muzak and slow jams. Who knew that First Take and Chapter Two were such extraordinary records?

"Supermarket Blues" is amazing. Unfortunately, it's the first track by McDaniels I ever heard, and I haven't liked any of his other material quite as much. I haven't explored his entire discography yet, but I recently got my hands on Headless Heroes Of The Apocalypse. It has definite strengths, but nothing (to me) reaches the same heights as "Supermarket". We'll see where it takes me upon repeated listens.

Adam---Funny that you mention Tom waits. After I listened to Eddie Harris, Leon Redbone, and Screamin' Jay Hawkins, Tom's music definitely lost some of its mystique. He's still a fantastic artist---maybe just not quite as much of an original as I thought. To this very day, I rock an old Bone Machine T-shirt I bought right after that LP came out. My friends and family will probably bury me in it one day ;)

That Eddie Harris joint is nice. I've been getting my oldies on lately. Thanks...school me on some more shit!

Ahhh mentioning Leon Redbone brings up memories. My mom got me hooked on him as a kid. I'm going to have to track down some of his stuff again

Quite worthwhile information, thank you for the article.