Over Breaks Dug Out Of Crates 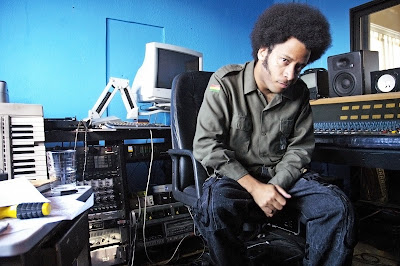 I'll gladly initiate, if you promise to appreciate:

It always amazes me how I can go a lifetime without encountering something at all, and then suddenly, I'm exposed to it repeatedly. Such was the case with Carolyn Franklin. I was aware of her by name only, but didn't remember ever having heard any of her records. I knew that she had provided background vocals for Aretha Franklin (her older sister), but for whatever reason, I never checked out her solo material. That changed just recently, when I acquired her song "Sunshine Holiday", and about a week later, a friend exposed me to "You Can Have My Soul". Yesterday, I encountered her again by way of ear fuzz, where you can download two of her tracks---"What Cha Gonna Do" and "I Don't Want To Lose You". Take a minute to check her out---I can almost guarantee you won't consider it a waste of your precious time.

"The Fuzz" is also featuring a couple of joints by Three Times Dope---"I Ain't Try'n 2 Hear It" and "I Got It". Both tracks are from their LP Live From Acknickulous Land (1990), which might be considered "old school" hip-hop by today's standards. Unfortunately, plenty of heads are still sleepin' on this trio outta Philly, so make sure you aren't the last one to smell the coffee...

I should have mentioned this a while ago, but some of my peoples will definitely want to know about There's That Beat! The Rare Soul Fanzine. Through the website, you can order their quarterly publication, which primarily focuses on Northern soul artists and records.

Cop a few J Dilla mp3s over at the jesus piece. In addition to "Wild", the selection from Ruff Draft that I posted, you can also download another song from the reissue, "Take Notice" (w/ Guilty Simpson). If that's not generous enough, two other joints produced by Dilla are also included in the post---"Off Ya Chest" (Frank-N-Dank) and "Reunion" (Slum Village).

Travis at Wake Your Daughter Up recently posted The Coup's Steal This Album for free download. Regardless of how you feel about bloggers uploading entire albums, you can't argue with copping a record that begs to be acquired by way of the "five-finger discount".

Speaking of The Coup, Boots Riley has recently been invited to be the keynote speaker at UC Berkeley's Black Graduation Ceremony---further details are available here.

As some of you may already know, Wu-Tang Clan's "Hollow Bones" featured a sample of "Is It Because I'm Black?" by Syl Johnson. Both tracks can currently be obtained courtesy of sneakmove.

While we're talkin' samples, head over to Palms Out Sounds to download songs borrowed for tracks by Jay-Z and DJ Quik.

Interestingly, marijuana is now being tested for a drug that will allegedly suppress appetite. Soon to follow is a cheap wine that will counteract nausea and vomiting, as well as a snortable cocaine-based medication to alleviate sinus pain and post-nasal drip...

Download "Here But I'm Gone" by Curtis Mayfield via the horse latitudes.

I like posting Pete Rock joints so frequently that I've often contemplated writing a blog that focuses specifically on his recordings. Guess there's no need for that---this site is already doin' it, doin' it, and doin' it well...

Once again, Keith Olbermann has put George Bush on blast by pointing out the similarities between Dubya's rhetoric on Iraq in 2002 with the bullshit he's spitting about Iran in '07. Watch the video clip via Crooks and Liars.

Download joints by OC, Main Source, and Lord Finesse by way of this is tomorrow.

Cop one of my favorite RJD2 tracks over at Covert Curiosity---"Good Times Roll Pt. 2".

Little Brother and 9th Wonder have officially parted ways. Read all the sordid details at HHG.

Download "Zero Point Pt. 1 & 2 (45 Version)" by the incredible Kashmere Stage Band at The Mark Out.

Visit floodwatchmusic to d/l "Come Go With Me" by Teddy Pendergrass.

Cop "My Block" by Scarface courtesy of hahamusic.

As always, JT has been posting some fantastic stuff over at Feed Me Good Tunes. This post features tracks by Gil Scott-Heron, Five Deez, MMW, Skyzoo & 9th Wonder, Five Deez, and Max Roach. One of his previous posts included songs by Paul Pena, Eldridge Holmes, Ahmad Jamal, and Eugene McDaniels.

If you've never been to Tennessee, this may be the year to go---Memphis is celebrating 50 years of soul. Check out all of the events they have scheduled, and get some assistance in planning your expedition.

Before I peace out, I'd like to thank the following spots for recently linking Souled On:

Mainstream Isn't So Bad...Is It?

And much gratitude to Jody at The Side Street for giving me such mad props, whether I deserved them or not ; )

"When suffering knocks at your door and you say there is no seat for him, he tells you not to worry because he has brought his own stool." ---Chinua Achebe
Posted by Scholar at 9:00 PM

Check mine too
www.musicselections.wordpress.com , if u like it , hit me up as we could exchange links.

I've been on a huge soul/funk binge lately, and I thank a lot of that to this site, the "and it don't stop" blog, and the usual Ear Fuzz and Soul Sides. Some good stuff.

3XDope has long been one of my favorites. EST actually appears on the remix of "Where are they Now" if you haven't heard it yet.

Actually, Brian, one of our contributors did the Coup post. The Coup was actually one of those groups I was sleeping on up until finally sitting down and listening to "Pick A Bigger Weapon". I've checked out the others finally, they are on my list of things to buy.

Marijuana for supressing an appetite? Last time I smoked, I ended up eating a gallon of Toll House Cookie Dough Dreyers Ice Cream.

That Pete Rock site is nice, I've ran into a couple times, I need to finally link it one of these times.

my pleasure.. i dig your site and music selections a lot..
michael. audiversity.com

thanks for the link to my page. this is a reaal dope blog. i'm gonna be checking this one regularly. good work.

muchas gracias for the link

Anon---Thanks. I remember visiting your site a little while ago, but I lost track of you after that. I regret it, too, because you guys are posting some incredible stuff. We can def. do a link exchange.

Travis---It's weird, but even though I know you have fellow contributors at WYDU, I guess it's all about you as far as I'm concerned. Apologies to Brian, though, for the fact that I failed to give him due credit for the post.

Glad you've been diggin' on some soul and funk stuff lately. I don't think it's a binge at all---you're hooked. I give you a few years, and you'll probably know more about these genres than I do.

I get the damn munchies so bad sometimes that I consume some REALLY questionable food products. I find the whole concept of using weed as a dietary aid truly fuckin' fascinating.

Michael---
The respect is mutual. I regularly check out Audiversity now, and I hope my readers will do the same. Thanks for stopping by.

Mike---
Gratitude. I've been reading the jesus piece for a long time, so I appreciate the props.

Great Scholar. I got u linked up on www.musicselections.wordpress.com.

"I Don't Want To Lose You" was really nice, I didn't know about Carolyn's stuff - guess I didn't look closely enough at my Aretha album to notice her much when I was young either. Also thanks for the Curtis Mayfield AND the readers you've sent via the link to my blog. (God! they come from all over too! Not just the Northwoods readers I am used to)
Tho' I feel kinda guilty since I'm way off your topic and am having SERIOUS blog angst these days anyway and I suspect I bore the hell out of them - oh well. I am what I am, I guess.
Someday you should (if you haven't already) do a post on how you just don't burn out. Your devotion to your blog and readers is amazing.

Marty---Thanks. Will return the favor.

Jody---Don't worry at all. I don't think my readers are used to getting anything in particular from me. I incorporated music, art, politics, and life into the title because I figured that would encompass just about everything I could possibly feel like linking or talking about.

As far as my persistence in the blog game, I don't honestly know what the magic formula is. I get tired myself sometimes and think about quitting. It can feel like a pretty worthless endeavor, especially when your readers don't offer feedback as often as you'd like. Then I'll get some inspiration from good music or an interesting article, and I'll want to share whatever I found with my readers.

Then, too, there are always people like you who come along and let me know I'm being heard. That helps ;)