With Your Bad Self 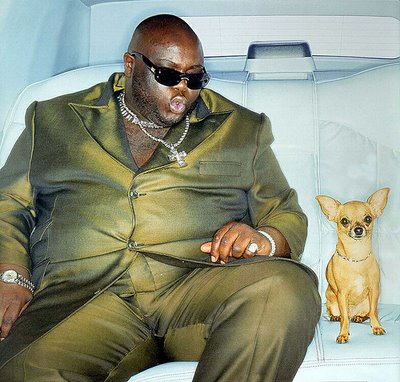 I hadn't planned on posting anything today, but hopefully you're willing to roll with me as I improvise along the way. I have a handful of exceptional joints that I've been wanting to bestow upon you---appreciate...and try not to hurt yourself:

"You Ain't My Brother"---The Soul Shakers
Tobias Kirmayer is a vinyl junkie, DJ, label owner and collector of rare funk records. He's released a few compilations of obscurities, including the collection that featured this particular groove---Movements: 14 Deep Funk Pearls. This is an amazing tune that somehow commands you to get up and get down---all at the same time.

"Gangsta Boogie"---Pete Rock/ Slum Village
I've been holding this one for a little while longer than I should have---it's one of the dopest joints on Pete's Masterpiece 01 mixtape. I don't think it would be an exaggeration to say that this would rank as one of the most laidback and enjoyable hip-hop tracks I heard in '06. Hopefully you'll agree...

"Mash It Funky (Just James Version)" ---dj BC
As you may recall, this is the same cat responsible for Wu Orleans---a mashup opus of Wu-Tang Clan plus dixie jazz tunes. This groovy lil' tribute to James Brown is one of the best I've heard so far.

"After Laughter Comes Tears"----Wendy Rene
Speaking of the Wu, this soul gem was featured as a sample on "Tearz", a joint from their classic Enter The Wu-Tang (36 Chambers) LP. Rene was a Memphis soul singer who originally recorded as part of a group called The Drapels, but signed a solo deal with Stax Records shortly thereafter. This song was released in 1964, and is considered by many to be her finest recording.

"Oochie Wally/ Right Now, Right Now"---DJ Swindle
Some of you will undoubtedly cringe at the thought of this entire mix---AlMatic: Nas Meets Al Green. There are a couple of reasons you may be inclined to prejudge this joint---"Oochie Wally" isn't exactly the greatest Nas track of all time, and some would consider it blasphemous to combine any rapper's lyrics with the sounds of a soul legend of Green's magnitude. As you may have noticed, I'm not exactly a "purist" when it comes to music appreciation. I consider myself more of a realist---if it bangs, it bangs. Don't be too uptight to at least give this a listen...

"All the good music has already been written by people with wigs and stuff."---Frank Zappa
Posted by Scholar at 10:10 PM

A great selection as always. My head was bouncing listening to every tune, especially The Soul Shakers. I hadn't heard of that Nas/Al Green project, but from the Myspace page it's clear you chose the standout track to post. It also got me to go back and listen to that Talib Kweli song "Good to You," another song with an Al sample.

I got goosebumps when I saw that Pete Rock/SV joint!

Always wanted to hear that "Tearz" sample, good looks for that one!

I thought the ALMatic album was really good (I thought Life's a Bitch and the Made You Look remixes were the standouts), but no matter what beat you put under it you'll never convince me that Oochie Wally sounds good!

Adam---thanks for the props. I'm not sure from an objective standpoint whether "Oochie" is the standout track on ALmatic or not---as you can see, Fresh has a different perspective. I think it bumps, but I'm definitely not above indulging myself in guilty pleasures either ;)

Trav---I wanted to up that Wendy Rene track because I don't think it was even on either of the Shaolin Soul comps. It's a great song, but in this case, I heard the Wu joint first. For better or worse, I can't listen to it without hearing "Tearz".

Fresh---yeah, I kinda knew that someone was gonna put me on blast for that "Oochie" remix. "Oochie Wally" has to be my least favorite Nas track ever---the lyrics are shallow and overly disrespectful towards sistas. Love the remix though, because I was just nodding my head to that beat, and forgetting all about the stupid words. That happens sometimes...

yeah, that Pete Rock joint is the shit. But i've never heard the Soul Shakers. thanks for that.

Matt---Happy to return the favor---you've got me checkin' for Linton Kwesi Johnson.