I Amaze And Astound/ Rhythm Up And Down 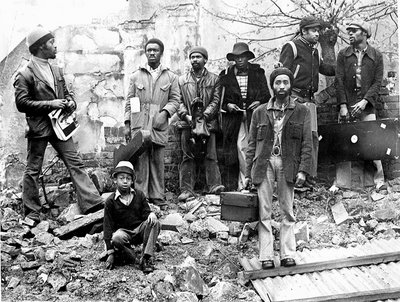 The wisest people in the world listen twice as much as they speak:

"Brothers On The Slide"---Cymande
Although Cymande's music is frequently classified as funk, their sound was also heavily influenced by jazz, soul, Afro-Carribean rhythms, and many other musical styles. "Brothers On The Slide" appeared on their Promised Heights LP, which was originally released in 1974. It was one of three solid albums that the group released in the early '70s, but widespread interest in the group wouldn't peak until 20 years later, thanks in large part to crate-digging DJs and producers. Their songs have been sampled in joints by Masta Ace, The Coup, EPMD, The Fugees, Smiff-N-Wessun, De La Soul, Busy Bee, Cash Crew, and more. This particular track was sampled by Poison Clan in 1995 for a track called "Peep Da Flavor" that appeared on their Strait Zooism LP. More recently, MF Doom borrowed it for "Cedar", one of the joints on Special Herbs Vol. 7 & 8.

"Flow On (Pete Rock remix)" ---Lords Of The Underground
Lords of The Underground often get overlooked these days, but they were somewhat of a staple of the early '90s hip-hop scene. They released a few successful singles, such as "Chief Rocka", and BET named them Best Rap Group of the Year in 1993. The group got their first viable opportunity after being introduced to Marley Marl, who invited them to record in his studio and helped to craft their unique sound. Pete Rock put his spin on a couple of their tracks in 1994, this being one of them. I don't care what anyone says, Pete's nicer with the remixes than just about anyone...

"Creation"---El Michels Affair
No matter what kind of music you like, I recommend giving El Michels a listen. Soul, funk and jazz fans have finally begun to acknowledge their excellence, and most hip-hop enthusiasts ate up their instrumental covers of several classic Wu-Tang joints, as well as their live collaborations with the group. "Creation" appears on their Sounding Out The City LP, a record you should go forth and purchase without the slightest hesitation.

"When You Come To The End Of Your Road"---Bobby "Blue" Bland
It's misfortunate that Bobby Bland's work isn't more widely celebrated and recognized, especially since he's placed 51 songs on the R&B Top 40 charts throughout the course of his lengthy musical career. In part, this cultural oversight may be due to the fact that only a few of his tracks enjoyed any crossover success on the almighty pop charts. His discography offers a lot of amazing selections to choose from, but I decided on this particular song because it's fantastic and I thought it might lead some of my sample seekers to dig a little deeper into Bland's collection. In case you suffer from drug-induced short-term memory loss, RJD2 flipped this track on his "Final Frontier (remix)". Here's a short bio and discog if your interest has been piqued.

"In examinations, the foolish ask questions the wise cannot answer."---Oscar Wilde
Posted by Scholar at 2:13 PM

Song choices are on point as usual. Special thx for the Bobby Bland tune and the El Michaels.

Strangely, I was looking at that pic of Cymande only yesterday. I got a shock seeing it on your blog just now - but the reason is the same. I'd just put Brothers on the Slide on a compilation for a friend and was getting a bit of info about the band together to send with it. It's a great track on many levels.

Good quote from Mr Wilde too - hadn't come across that one before.

I've really been debating on getting that El Michaels. I think I'm going to have to splurge and just do it

Bones---It's good to know that someone appreciates my hustle :) By the way, I really liked your post on P.E.A.C.E. over at Cuts and Rhymes. He deserves to get some shine once in a while...

red---This has to be a case of great minds thinking alike ;) Nice to hear from you.

Travis---I was slow to get on the short bus with this myself. I've been posting links to info. and mp3s about El Michels for quite a while, but I just recently listened to Sounding Out the City in it's entirety. It's an amazing record---well worth the splurge.