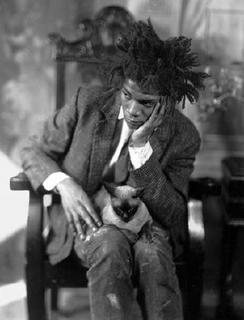 I imply in the title of my blog that art will be a part of the subject matter. So far I haven't lived up to my name in this regard, so I thought I'd center today's post around an incredibly talented artist by the name of Jean-Michel Basquiat. He was born to a Haitian father and Puerto Rican mother in Brooklyn in 1960. When he was about 17, he started spray painting subway cars and abandoned buildings in the city slums. The infamous tag he used was SAMO, which stood for Same Old Shit. A year before his graduation from high school, he dropped out to fully pursue his artistic endeavors. His creativity began to work its way from concrete to canvases, and in 1980, his work finally received recognition. Around that time he befriended legendary artist Keith Haring, who helped him get his artwork displayed in various exhibits. In 1983, he established a friendship and working relationship with Andy Warhol, and the two did a series of collaborative works that also garnered Basquiat attention in the art world. Sadly, he was dead only five years later from an overdose on heroin. Basquiat remains relevant today because of his vivid depictions of street life as he saw it through his creative eye. He had a unique perspective on his surroundings, and his paintings portray the depth of his conflicting emotions. OKAY---ENOUGH OF THIS PRETENTIOUS BULLSHIT. If you want to know more about Basquiat, there is a movie directed by Julian Schnabel called......you guessed it.........Basquiat. I'm also posting a link to a site where you can see his work, and learn more about him. For some satanic reason, the site also includes a critique of his work written by none other than Johnny Depp. We all know that he is the ultimate authority on such matters, so why the hell not? So get some culture and do something to maintain your brain by going to: http://www.basquiat.net/ Your intelligence is rotting away from being subjected to all of those Home Improvent reruns, and you know it.
Posted by Scholar at 12:45 AM

ummmmppphh you suck my dude.
that interview at wydu made me go into your archives, and you're killin' me.
even tho there's no dls here, it's interrupting me from homework time. I KNEW IT!!

keep up the great work.