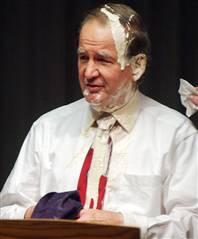 Old news is still good news: Many of you have probably already heard that Pat Buchanan got salad dressing dumped on him during a speech he was delivering at a university recently. A young man with a mohawk came running out of the crowd unexpectedly, and showered Buchanan with Caesar dressing before anyone had a chance to react. Sorry, but this is pretty funny stuff. Afterwards, the big question seemed to be why the man did this in the first place. He responded to the press by saying that he felt it was offensive for Buchanan to give a speech on Cesar Chavez's birthday, when clearly, Buchanan's ideology on immigration is in sharp contrast with what Chavez believed. That part makes sense. My question was totally different, but hasn't been answered-----is Pat Buchanan TOTALLY retarded? He obviously missed the whole poetic significance of the Caesar dressing---even after tasting a faceful of the shit, he still thought it was ranch.

Click to read the article and see an interview with the "perpetrator": http://www.woodtv.com/Global/story.asp?S=3153391&nav=0RcdYA7G
Posted by Scholar at 2:42 AM

I have been keeping tabs and your blog doesn't suck. I never thought anyone would be interested in my quirky thoughts either.

I look forward to reading more.