Just A Soul Whose Intentions Are Good 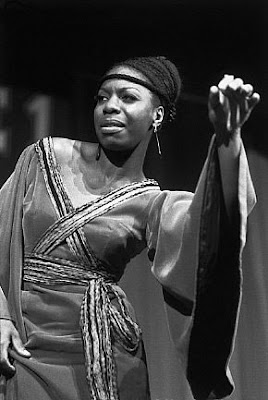 Lately I've been waxing nostalgic about the origins of this site, and more importantly, the roots of my love for soul music. Doing the guest blogger series (which is far from over) has fostered an even greater appreciation for the mutual respect and sense of community that now surrounds me from music lovers all across the globe. At times it seems like a tremendous amount of work to keep this whole operation running smoothly, but at its fundamental core, making Souled On happen has always been a labor of love. It's something that I genuinely enjoy doing for myself and all of my fellow soul children around the world.

Taking things back to the essence of what drives this passion, I decided to do today's post on the artist who's probably influenced me the very most over the years---the late, great Nina Simone. I have no desire to write a scholarly article about her work, particularly because her impact on my life has been primarily visceral. There is a voluminous amount of available material about her career from a biographical standpoint, and there's probably not much I can add to the base of knowledge regarding her work. Rather, I would like to present a handful of songs and videos that have become an essential part of my audiophilic existence. Through these means, I am hoping that you will simply feel her presence, as opposed to trying to understand my devotion from a more cerebral perspective.

Thank you to all of my readers for taking this journey with me. This is where it all began... 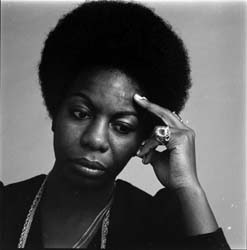 "Don't Let Me Be Misunderstood"
I posted a studio version of this track some time ago, but this is the live version that was sampled on Common's "Misunderstood" from his new Finding Forever LP. I love both versions, but there's something incredibly organic about this particular take on the song.

"Either Way I Lose"
A stunning track penned by Van McCoy and recorded by Nina during a studio session in New York in the autumn of 1965.

One of my absolute favorite Nina performances---a live rendition of the powerfully affirming "Ain't Got No/I Got Life":


"I Shall Be Released"
As an activist as well as an artist, Nina often chose songs that were representative of achieving both personal and political freedom. This is just one fine example.

"Lilac Wine"
This is one of the first Nina tunes that grabbed me, shook me, and just wouldn't let me go. Besides being a gorgeous song, no one says the word "lilac" quite like she does...

"I Can't See Nobody"
Nina breathed a heart-wrenching intensity into this particular track, written by Robin and Barry Gibb; she recorded it during another New York session in 1967.

Footage of Nina performing the Screamin' Jay Hawkins classic "I Put A Spell On You" live in Montreal in 1992:


"Just Like Tom Thumb's Blues"
A brilliant cover of a Bob Dylan track, this is another song I discovered fairly early in my search for all things Nina.

"Sinnerman"
Easily one of the most recognizable and frequently sampled Simone songs---perfectly illustrates her strength in performing more uptempo jams.

Another touching performance by Nina---this one more stripped down and emotional. From a concert at Ronnie Scott's club in London in 1984; this is "If You Knew":


"The Assignment Song"
A Nina track with an entirely different flavor than the rest of these selections to give you a glimpse into her exceptional diversity as an artist...

"Everyone's Gone To The Moon"
A fitting endsong---Simone's arresting cover of a tune by Jonathan King.

This still hasn't done justice to an artist of her caliber, but it's an excellent start on a primary education...

“Music is a gift and a burden I've had since I can remember who I was.”

“To most white people, jazz means black and jazz means dirt, and that's not what I play. I play black classical music.”

“Everything that happened to me as a child involved music. It was part of everyday life, as automatic as breathing.”

“If I had my way, I’d have been a killer. I would probably be dead today, I would’ve used guns; I was never non-violent.”

All quotes courtesy of Nina Simone
Posted by Scholar at 8:30 PM

How ironic you would feature Nina for this post. She's all I've been listening to for the past three days with my favorite being Let It Be Me. Sometimes it is good to slow things down; it allows you the space for self-reflection and remind you of those things that has nurtured your existence. Nina and this site has done that for me. Thanks, PK

Wow! Just a powerful and moving post. 'Ain't Got No', I've never heard before. How such a simple song could be so powerful. Very thought provoking and appreciated.

Thanks for this post Scholar. The first Nina song i ever heard was "Love Me Or Leave Me", on a Verve jazz masters CD, and i was instantly blown away by what i was hearing, and still get the same feeling when ever i listen to her.

nice article once again... just wanted to let you know that i posted your guest mix today...
thanks again for your interest and the invite to contribute to your great site... keep up the good work... mike

You might be interested in the efforts to memorialize Nina Simone in her birthplace, Tryon, NC. The Eunice Waymon-Nina Simone Memorial Project contains three elements: a needs-based scholarship (2007), a bronze memorial statue of Simone (2008), and an annual trans-world music festival in the name of Nina Simone (2009). An informational brochure is available on the project's website. VIVA NINA!

Nina Simone = greatness. That's all I've got to say.

I'm a huge, huge Nina fan and yet somehow I have almost none of these particular recordings, so thank you very much. These are amazing. I'd been wondering about the version sampled for the Common track so that is a particular treasure for me. Thanks again.

I consider every person should read this.

i love this woman and her beautiful voice so much! seriously!

Hello friends
What phone are you using with default ringtone? Want to change? I have the best quality ringtone collection you can refer and leave a comment. The sound effects of my ringtone are of the best quality. Visit my homepage to find more ringtones and settings by following the instructions: https://bestringtonesfree.net/

Wish you have the best ringtone on your mobile phone. Free quality ringtones. Share to download your favorite ringtone. Thank you!

This is how we should have to manage the blog. I really like your working here on that blog. Reading wonderful blogs on instagram, please go to site picbear