Racial Superiority Is A Pigment Of The Imagination 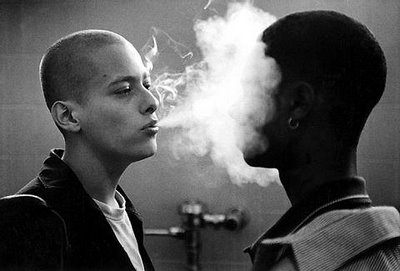 All tendencies toward procrastination aside, I proudly present your (almost) weekly linkage report:

You have to admit, this has been a totally disastrous week in terms of race relations. I have somewhat ambivalent feelings about both Common and will.i.am, but I have to give them credit---"I Have A Dream" offers a fairly relevant and insightful musical commentary on what's really crackin' in the "land of the free". If you haven't come across it yet, you can cop this track courtesy of Between Thought And Expression.

Dilated Choonz recently posted a groovy joint by Herman Kelly & Life---"A Refreshing Love". You may not recognize the name, but Kelly is responsible for "Dance to the Drummer's Beat"---a track that was a favorite of many old school DJs, including Grandmaster Flash and Afrika Bambaataa.

Three fresh Nas mp3s are currently available via Nah Right: "Black Republicans Remix" (w/ Jay-Z, and now Sean Price), "Where Are They Now" (No DJ promo version), and the most overblogged song of the week---"QB True G" (w/ The Game). Note: The latter joint is now called "Hustlers" on the most recent incarnation of the tracklist for Hip-Hop Is Dead.

Speaking of the genre's alleged demise, Skillz just released "Hip Hop Died?"---download his two cents on the subject via Notes From A Different Kitchen.

At Palms Out Sounds, you can score a ton of tracks that have been sampled in Pharoahe Monch joints, including songs by George Benson, The Ohio Players, Donald Byrd, Quincy Jones, Patrice Rushen, Bob James, and more.

There has been a lot of talk recently about the ridiculous battle between Jay-Z and Jim Jones. If you're trying to follow this whole thing more closely than I am, you may want to check out this comprehensive "diss anthology", brought to you by The Rap Up. And by the way, if you're in search of the Rasputin's Stash song ("Mr. Cool") that was sampled on Jones' "We Fly High", look no further than 1-800-Sassbucket.

If your Ghostface doll hasn't had anyone to play with lately, you should consider purchasing the new Madvillain figure when it drops in January.

Millie Jackson fans may want to head over to all up in your earhole to download "The Rap" and "It's All Over But The Shouting". Two other songs, "All The Way Lover" and "I Feel Like Walking In The Rain" can be acquired at Feel It.

I have made mention of Rotary Connection on more than one occasion. Recently, their cover of Jimi Hendrix's "Burning Of The Midnight Lamp" was posted at Silence Is A Rhythm, Too. If you've heard "Hova's Song" by Jay-Z, you will easily recognize this song as the sample source.

Speaking of original songs that have been sampled, O-Dub is currently offering a few Willie Hutch songs that were used in hip-hop joints. He also posted a pretty nice "Mr. Me Too" remix (by Z.A.K.) that blends the Clipse joint with "Honey Dove" by Lee Fields---download it here.

More sample madness is available courtesy of Jzzy at The Revolution Will Not Be Televised. Within the confines of a single post, he posted a generous number of original songs by Otis Redding, Dionne Warwick, Donny Hathaway, Curtis Mayfield, Galt MacDermot, Nina Simone, Maceo Parker, and more.

The Low End Theory has resumed posting on the regular---be sure to pay them a well-deserved visit.

Some of you evidently appreciated that Showbiz & AG joint that I posted a while ago---"Hold Mines". I figured that some of you may be interested in copping a couple of joints from AG's latest LP, Get Dirty Radio. Grab "A Giant By design" and "If I Wanna" at download.com.

Travis at Wake Your Daughter Up recently posted some interesting thoughts and information on what the RIAA has been up to lately.

The Stepfather Of Soul blessed us with a classic track by Oliver Sain---"Bus Stop".

Before I go, it's necessary that I express gratitude to a few blogs who've been kind enough to throw some link props my way. Respect to Oh Word, sneakmove, hahamusic, los amigos de durutti, Exploration of Music, Sound Experiment, and floodwatchmusic, and anyone else I may have inadvertantly forgotten.

"One day our descendants will think it incredible that we paid so much attention to things like the amount of melanin in our skin or the shape of our eyes or our gender instead of the unique identities of each of us as complex human beings." ~Franklin Thomas

"I refuse to accept the view that mankind is so tragically bound to the starless midnight of racism and war that the bright daybreak of peace and brotherhood can never become a reality.... I believe that unarmed truth and unconditional love will have the final word." ~Martin Luther King, Jr.

Come on now. You have to start linking me and SOULcrates. This week I have a Hova Sample Session.
Check it out.
SOULcrates

Maybe it's just me, but I can't STAND that Common joint. It sounds like watered down crap.

^ I second that. That Common joint is seriously lacking.

Respek back your way as well... I enjoy the site.

Grant---I got you, man. That Jigga playlist is tight. Don't you think Souled On deserves a link on SOULcrates, too, though?

Travis & Flood---I actually think I'm in the minority when it comes to that Common joint---I doubt most heads really like it. It's "pop rap" for one thing, which seems to be all that Will.I.Ain't is capable of anymore. I guess I'm just getting tired of bitches, bling, and crack. For me, it's kind of refreshing when artists attempt to bring something a little different to the table---even though more often than not, there's still an element of mediocrity. Music with the slightest hint of social relevance seems somewhat noteworthy, even when it's still a far cry from what made hip-hop so great in the first place.

Scholar - I'm with you on Common's words. Bling and bitches sells CDs for the record companies but I'd rather have a bit of serious social comment any day. That poppy beat is hard to like though... reminds me of the xmas music playing in the shops.

Props to Common for putting it out there anyway. When there's things like the cops killing Sean Bell going on, we need people who can talk about stuff other than bling.

been diggin' Sean P since Nocturnal.

"run up the wall and taekwondo" killa line lol!

good looking out for the track. yeah man when you hit the UK look me up, show you around london.

red one---couldn't agree more. I can appreciate music that exists solely for entertainment's sake, but the roots of hip-hop have such a strong sociopolitical basis that it's sometimes disappointing that the entire art form has been so shamelessly diluted by formulaic industry bullshit.

Obi---I'll definitely hit up for that tour...and I'd love to meet your pharmacist ;)