Some Of My Friends Be Like A People With Stems 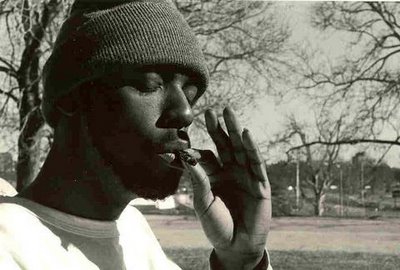 Hope this post finds all of my peoples phat and happy...

As for myself, I've just been relaxin' and blowin' mad smoke...observing the holiday and enjoying the opportunity to take a few days off from my usual routine. It was a pretty strenuous ordeal to move my ass up off of the couch just now, but it was probably about time to alter my listless state of inertia anyway. Now that I'm finally back on my grind, let's go ahead and do this damn thing:

"E.V.A."---Jean-Jacques Perrey
This song is a funky, spaced-out jam that has been harvested repeatedly to provide a foundation for numerous hip-hop tracks. Here are just a few examples:

"Lower Da Boom"---The Artifacts
Tame One and El Da Sensai have both fallen off somewhat since they went solo, which makes me wonder if the babies have any idea how great these two were in the day. This track is right in time with the theme of today's post---all hail the Mary Jane. This is somewhat of a love song for those who like to "romance the plants" every now and again...

"Same Ol' Thing"---A Tribe Called Quest
Although this track offers a somewhat different perspective on marijuana use/abuse, I would argue that this is still a highly dope joint from one of hip-hop's finest crews ;)

"Just To Get A Rep (Video Version)" ---Gang Starr
Guru and DJ Premier also utilized "E.V.A." to craft one of their most beloved and widely-known tracks of all time.

Additionally, "E.V.A." has been sampled on a host of other tracks, including songs by Erick Sermon, Ice T, DJ Spooky, Lord Finesse, Dr. Octagon, and more.

Finally, I can't leave the building without giving a nod to my loyal soul fans:

"I Miss You"---Harold Melvin and The Blue Notes
Comparatively speaking, the soul ballads I post generally get more play than anything else I upload. Most of you thugs are obviously a little more emotional than you care to admit...This is an undeniable classic that most of you should recognize. It enjoyed some success on the charts in the '70s, and more recently, Kanye sampled it for Jay-Z's joint with Scarface, "This Can't Be Life".

As always---be easy, kids. Blaze these joints and hold 'em in your lungs until we meet again...

Word From Your Moms---

"One's condition on marijuana is always existential. One can feel the importance of each moment and how it is changing one. One feels one's being, one becomes aware of the enormous apparatus of nothingness---the hum of a hi-fi set, the emptiness of a pointless interruption, one becomes aware of the war between each of us, how the nothingness in each of us seeks to attack the being of others, how our being in turn is attacked by the nothingness in others."---Norman Mailer

nice blog you got here.

Mna, you keep slpping me in the face woth these classics, Congrats on your good taste!

Jim Hendry said...
This comment has been removed by a blog administrator.
12:21 PM

Blazin' as I speak!! Puff puff puff puff then pass. I'm greedy when it comes to the inhalation of some good purp.

Check the playlist I created when I was in one of my altered mind states, Oh wait, that's every playlist.
Peep the spaced out mind state.

Red One---gratitude. I've looked at your blog a couple of times in the past few days, and I sincerely wish that you were still posting. You had a good thing going there. Thanks for reading.

Kola---nice Guru post. I have a VERY long list of blogs that I check for my linkage posts. I added your site to my rotation, so expect a mention in the near future. I have much respect for anyone who loves music as much as you seem to---even if you can't spell worth a shit ;)

yup it's ur boy. now i gotta go find my local pharmacist for some ital tings seen. ish to burn while i listen to all these good tunes.

heya scholar, great picks, as always. wanted to let you know there's a new sample wednesday- we've been slacking, but i'm comitted to picking it up again. i think this is a good one...

Thanks Scholar, that is really kind.

Obi---Glad to see you're still hangin' out around these parts once in a while. I really miss Soul On Ice, but it's good to know that you're still hittin' up the pharmacy and keeping your eye out for good tunes. Stay in touch. One of my best friends is living in the UK now, and I'm planning to visit in summer. Maybe we we can puff and stuff at some point in my travels. 1

Haldan---That was a great SW post. There are a lot of blogs now that seem to be focusing exclusively on sample sources. I think Palms Out contributed quite a bit towards that movement. I can't think of a better way to get people to recognize and appreciate some of these classic joints that they wouldn't listen to otherwise. You'll always get mad props from me for that.

red one---no thanks necessary---my comment was well-deserved. We definitely have solidarity on a lot of issues, and some similar taste in music. If you ever resume blogging, just say the word. Shameless promotion of your efforts will logically ensue ;)