Karma's a Bitch ... or How I Learned to Stop Worrying and Forgive Sly Stone

Today's guest feature and funky essentials are brought to you courtesy of the one-and-only Adam Jacobson-musician, writer, and an irreplacable member of the ever-growing Souled On family. Adam is the head writer at hahamusic, a site I've held in the highest esteem since its inception nearly one year ago. Few audio blogs offer the sort of musical variety and exceptional writing that this one does, which is a fundamental reason why it continues to be a mainstay in my rotation. There aren't too many places where you'll find Arctic Monkeys, Sam Cooke, Woody Guthrie and The Roots all hanging around together on the same page---no? Besides, Cover Tuesdays at haha are now an integral part of my weekly routine, and believe me---I wouldn't have it any other way...

Alright, soul kids---time to let Adam school us on karma, Sly Stone, and the fine art of yodeling. Thanks for being here, bro...Scholar 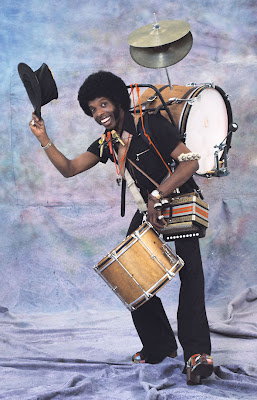 First of all, let me just say how big a thrill it was to get an email from Scholar asking me to write a guest post on Souled On, (even more so, now that I’ve seen the other folks who have written them). My site hahamusic owes a lot to Scholar (he was the first person to link us) and Souled On has been a big inspiration, so I’m hoping this even comes close to his normal caliber of posting.

I could never get on board with the concept of karma. It seemed too easy to me, because if you follow the logic (you have internal balance of good and bad acts that you have committed, etc), you can absolutely cheat at it. Say one day you jump into a lake and save somebody from drowning and the next day you rush into a burning house to save someone from burning alive respectively, do you push your karma points so far into the positive that you’ve got enough to push all those kids out of the way to get to the front of the ice-cream truck line so you can get your Fudgsicle first? Doesn’t seem quite fair does it? Not to me anyway.

So what does this have to do with sweet soul music? Or music at all? Well, I’ve been thinking recently about how we as fans give a free pass to musicians (or artists in general) who have created music (again, or art) that we really really enjoy. I’m sure you’ve done this: Your favorite musician puts out an album, or even a song on which he/she tries to do something different and experimental and fails miserably. But you let it slide, because hot damn, their first album filled a hole in your life you never knew you had, and that summer it came out you LIVED that one song from it. I have friends that will overlook entire DECADES of their favorite musicians’ careers (think Bob Dylan in the 80s) out of pure loyalty to those musicians.

This all came from the fact that I recently bought the Sly & The Family Stone album There’s a Riot Goin’ On. I hear you soul children, “Just recently? What’s wrong with you? That’s one they should issue people upon leaving the birth canal!” Regardless, I just got the album and quickly settled into it like an old comfy chair. Those old favorites “Poet” and “Family Affair,” hearing the beat on “Brave and Strong” and racking my brain to figure out where it’s been sampled (“3 Minute Rule” from Paul’s Boutique) ... it was good. But one thing really bugged me about the album. One song actually: “Spaced Cowboy,” on which Sly YODELS. Let me repeat that: Sly Stone, one of the funkiest people to have ever lived YODELS. The song itself isn’t really all that bad, but good gravy, that yodeling is like nails on a chalkboard and microphone feedback combined. But, here’s the thing: I can forgive Sly. He could make an album of just farm animal noises, and I could forgive him. He wrote “If You Want Me to Stay,” pretty high up on my list of greatest music made by human beings ever.

And then of course the conspiracy theorist part of my brain takes over and I start wondering ... What if Michael Jackson recorded Off the Wall, Thriller and Bad just to bank on himself being the batshit crazyweirdo dude he is today? Those folks with the signs supporting him at the trials weren’t there because they were close personal friends, that’s for sure. It’s like the karma thing: you score enough good points, people tend to forgive when you rack up a couple bad ones (or in Michaels case, a couple very heavy bad ones ... cough cough allegedly). I’ll say this, if they make yodeling a federal crime, I might have to pick up a sign and head down to the courthouse...

"If You Want Me To Stay"

That post is the truth. James Brown, George Clinton, Prince, Outkast. Come to think of it I've given out alot of free passes in my day.

Oh I've definitely given free passes to artists over the years, Chaka being one of the main ones (Earth to Mickey, anyone?). But you know what, at some point somebody gave me some free passes too. (And it was a good movie, too!)

Great post! Had the opportunity to listen to this mix while sitting at my computer at work...Just what a sister needed to get through the morning without bullshit, but real shit...this mix was dope and hype.