In The Distant Sound Of Drums 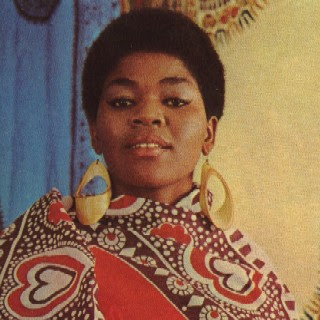 I once read a review of this legendary jazz/soul/latin groove track that said it "floats like a butterfly, but stings like a bee." Once you've listened to the song, that description will likely ring true for you as well. On the one hand, this record is subtle, delicate, and deeply affecting---on the other, it's mighty, potent, and incredibly charismatic.

I've read differing accounts as to when the track was originally recorded, but it seems to have surfaced in the late '60s or early '70s. Some of the confusion may be due to the fact that the record wallowed in relative obscurity for quite some time, sought after by only the most diligent of crate-digging audiophiles. It wasn't until Giles Peterson resurrected the track on Journeys By DJ: Desert Island Mix (2002) that a renewed interest in the song was piqued. Additionally, Jazzman Records has helped to give the recording some buzz in recent years by releasing it as a side on one of their 7" singles.

On a biographical note, Mbulu was born and raised in South Africa, but she moved to the United States in 1965. Throughout the years of her recording career, she's worked with a roster of talented artists, including Miriam Makeba, Quincy Jones, Harry Belafonte, David Axelrod, Cannonball Adderly, Hugh Maselka, and Michael Jackson. More pertinent information about her life and legacy is available here.

The Nite-Liters, a funky instrumental combo founded by Harvey Fuqua and Tony Churchill, joined forces in 1963. While they only had one major hit ("K-Jee"), the undeniable quality of their rhythmic groove offerings puts them on par with heavyweights such as The JBs and The Meters. In addition to the fine records these guys released under this name, they later merged with a variety of other musicians and vocalists to form the ensemble known as New Birth, Inc.

I tried very hard not to hate on Idlewild because I don't like being the sort of music lover who criticizes artists for refusing to make the same damn record over and over again. That said, their most recent release was definitely missing something that I used to love about Outkast---the sci-fi funk and spacy soundscapes which made Atliens one of the most interesting albums to drop in 1996.

Atliens is undoubtedly praiseworthy on the strength of its freshness and originality alone. Andre 3000 and Big Boi brought us a unique flavor of rhyme schemes and rap themes which broke new ground in the further exploration of hip-hop. As for the beats, they blessed the recording with a near-perfect blend of smooth, funky, and laidback tones. "Jazzy Belle" is one of many tracks on the album that exemplifies this sound.

Since most heads have already been exposed to this stellar joint, I decided to post a remix instead of the original version. I don't think much of anything could surpass the initial track in terms of quality, but this mix adds a different dimension to the song, offering a new spin on an old favorite.

One of the stereotypes about hip-hop culture that I would most like to see abolished is the notion that MCs and DJs just steal goods from their musical predecessors without appreciation or compensation. Apparently we have some geniuses out there who've overlooked the fact that this sort of thievery has taken place throughout music history as a whole, crossing over into every imaginable genre and style. It isn't really fair to focus specifically on hip-hop for its tendency to borrow, recycle, regenerate, and recreate. All music evolves out of other music in one way or another---if you don't know that, you're a fuckin' idiot.

Furthermore, to be fair, you have to admit that there are infinite examples of hip-hop artists paying respect to the architects by offering dedications, tributes, and shouts to their musical heroes and ancestors. Since neither one of us wants this to turn into a lengthy dissertation, I'm going to offer a single illustration of my point---"Jazz Music" by Gang Starr.

"Jazz Music" appeared on No More Mr Nice Guy (1989), Guru and DJ Premier's debut LP. The joint pays much respect to jazz greats as a whole, such as Duke Ellington, Miles Davis, Count Basie, and several others. One sample line explains the persistent relevance of the art form. "Yo, the music that Pops, and other cats made/it stayed, cause people love when they played." But perhaps there is no greater tribute than the memorable line at the end of the track: "They gave it to us, that's why we give it to you.

"Jazz Music" contains a sample of "Les Fleurs" by Ramsey Lewis. Let's just hope he was properly compensated for his input...

"That's All Right With Me"---Esther Phillips

Soul and R&B fans are undoubtedly familiar with the archetype of the long-suffering and victimized female. She'd just love to make her man breakfast and a hot cup of coffee, even though his cheatin' ass was with some stupid whore last night...and she knows it. She's gonna stand by her man, though---no matter how crooked his stance may be...

While I don't particularly like to hear women sing of themselves in such a derogatory and self-deprecating manner, there are still some unforgettable gems which happen to fall into this unfortunate category.

"That's All Right With Me" is a prime example of a song in this vein that's worth listening to, despite the infuriatingly submissive role that Phillips plays on the track. Don't get me wrong---love is all about compromise, and that's a beautiful thing. I just think it's kinda over-the-top to say: "If you want to make me your slave, that's all right with me." Screw that, soul children...

Despite my resistance on this solitary issue, Esther Phillips ranks as one of the finest female soul vocalists of all time. "That's All Right With Me" appears alongside her heart-wrenching cover of "Home Is Where The Hatred Is" on her 1972 LP, From A Whisper To A Scream. It's a bittersweet song, with emotions ranging from spirited hopefulness to utter despair. It's such a lovely track that Q-Tip sampled the record for Mobb Deep's "Give Up The Goods (Just Step)" (from The Infamous LP).

Please go here and here to learn more, and possibly better understand why I am such a devoted fan of her material.

"It is the nature of the wise to resist pleasures, but the foolish to be a slave to them."---Epictetus

Letta had me at "what is wrong with grooving?" Good looks.

Scholar, thanks for the writeup on Letta Mbulu. I used to use the cut 'Music Man' from the 'There's Music In The Air' album as my opening theme song when I did radio in college many years back. A really great voice that not nearly enough people are familiar with here in the US.

Thanks for the dope Outkast remix and the Esther Philips. Still tryin ta educate myself about soul and funk. Youve been a big help.

r and t---Thank you both for dropping some kind words about Letta.

And you're right, t---she's not recognized nearly often enough for her immense talent. "Music Man's" a stellar choice for a theme song, too---I'm diggin' that.

Zack---I'm happy to contribute to your delinquency any way I can.