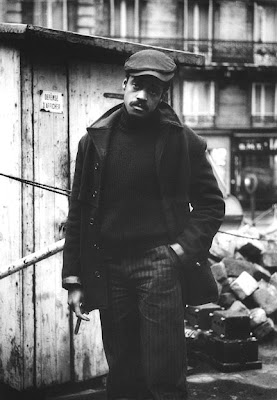 Chief Xcel is one-half of the hip-hop duo Blackalicious (along with Gift Of Gab), and has also been a longtime member of the Solesides/Quannum collective (w/ DJ Shadow, Lateef the Truthspeaker, Lyrics Born, etc.). In addition to his other projects such as Lateef and the Chief and The Maroons, he also helmed The Underground Spiritual Game LP, a compilation of Fela Kuti tracks that he selected and mixed.

While he's also a gifted lyricist, I tend to seek out his records on the strength of his production skills more than anything else. Xcel is a first-rate crate digger and vinyl collector, which enhances his ability to create some truly stunning collages of sound. "Multitude" (from the 2002 Astralwerks compilation, Constant Elevation) is an exceptional instrumental joint that should easily convince you of his skills.

"Make Me Believe In You"---Curtis Mayfield

I realize that Mayfield's Sweet Exorcist LP (Curtom, 1974) isn't nearly as celebrated as some of his other recordings, but it does happen to be the first record of his that I owned. I got a scratchy copy for 99 cents from a garage sale when I was a kid, and it has been a part of the soundtrack to my life ever since. I still know every pop, hiss, and skip in that album like the back of my own hand.

When I was thinking about which song I wanted to post from the LP, I decided to choose the song that I wore out the most. I did some damage to "Kung Fu", "Power To The People", "Suffer" and "Ain't Got Time", but it's obvious that "Make Me Believe In You" has been the easiest groove for me to fall into over the years. It's laidback soul vibe is blended so effortlessly with a tinge of funk that this track undoubtedly helped to bridge my appreciation for both genres.

I originally planned on ripping the track from my beloved broke-ass record, but then I realized that some of you might actually want to hear the song, so I copped a more listenable version. Enjoy...

"Love Is For Fools"---Southside Movement

I originally sought out Southside Movement's Moving South LP (1975) in search of the breakbeat gem, "I've Been Watching You". Upon first listen, the album didn't make much of an impression, and I thought of it as a collection essential more than a record I would actually want to listen to on a regular basis.

Fortunately, I've learned to revisit LPs that I have lukewarm feelings about initially, because sometimes these dishes are best served cold, if ya know what I mean. I finally pulled this off the shelf a few weeks ago, and I haven't stopped listening to this track ever since. The rhythmic horn blasts, funky guitar, soulful singing and stepping basslines culminate in an incredible sound that makes this tune a certified leftover classic.

"Up Above The Rock"---Ray Bryant

Ray Bryant is a respected jazz pianist and composer who started playing with the house band at the Blue Note club in Philadelphia in 1953. During that time and in the years to follow, Bryant accompanied many musicians and vocalists of the highest grade, including Miles Davis, Sonny Rollins, Dizzy Gillespie, Coleman Hawkins, Betty Carter, Charlie Parker, Milt Jackson, Carmen McCrae, and Roy Eldridge.

This particular track is from the LP of the same name (1968), and is an indisputable jazz masterpiece. The song starts off with an amazing drum break, but if you stop there, you'll miss out on the rest of what this superior groove has to offer. Triumphant, powerful, and uplifting...

Most people associate Melvin Van Peebles with his legacy in film, but his contribution to music is equally important. Many of his records tend towards the bizarre, and possibly even the insane, but there's no questioning that they're also innovative, groundbreaking and unique.

"Sweetback's Theme" is from the Sweet Sweetback's Baadasssss Song LP, the soundtrack to a film which is often credited with starting the blaxploitation genre. As legend would have it, Van Peebles scored the entire album himself because he couldn't afford to hire a composer. This was probably somewhat of a difficult task, considering that he couldn't read or write music. His secretary just so happened to be dating a member of a then-unknown group of starving artists called Earth, Wind, & Fire, who ended up performing all of the music. The record was released on Stax and enjoyed some commercial success that helped to promote the film.

If you haven't actually seen the movie, you'll have to check it out for yourself. I have mixed emotions about its overall quality and message, but I recommend seeing it at least once. If nothing else, the entertaining backstory made me interested in watching the film itself. For example, I've read that Van Peebles performed so many sex scenes for the film that he ended up contracting gonorrhea. He successfully appealed to the guild to get compensation for being "hurt on the job", and wound up using the funds to buy more film. Now, if that doesn't pique your interest, what will?

Van Peebles continues to have an influence on contemporary artists and musicians, and Madlib alone has sampled a countless number of his recordings. Check out his bio and discography here, while more information about the film can be found here.

"Livin' In The Jungle"---Schoolly D

Schoolly D gets much respect for his obvious influence on the evolution of hip-hop, but he is certainly not without his detractors. Due to the fact that he's credited with being one of the early pioneers of gangsta rap, many have accused him of tainting the art form with anger, violence, and misogyny. I'm not here to argue that point one way or another, but I think it's important to take on a broader perspective of his career than to merely mention his status as O.G.

For example, on many of Schoolly's LPs, he explored meaningful social themes, such as racial and political inequality, police brutality, and poverty in the black community. His conviction is somehow admirable, even when you don't agree with what he says, or how he says it. He was willing to battle with anyone and anything---crooked white people, the NAACP, and social injustices be damned. He said whatever the fuck he wanted to without the strength of a posse, crew, or unit to back him up, before the blueprint/formula for this sort of rebellion had been as specifically mapped out as it is today. I guess what I'm saying, soul children, is that Schoolly is not only relevant, he makes a lot of today's MCs sound like whiny little girls.

Don't try clownin' him about Aqua Teen Hunger Force, either. Schoolly was mad thugged out in the eighties, no matter what you say ...

Anyway, "Livin' In The Jungle" is one of my favorite joints from his "Afrocentric period". It appeared on his Am I Black Enough For You? LP (Jive, 1989). More schoolin' on Schoolly here.

"Generosity is giving more than you can, and pride is taking less than you need."---Khalil Gibran

This blog makes days at work a brreze. Much appreciation.

Niiiiiice write up on Schoolly D. I've always been one of his fans. His contributions to hip hop are often overlooked and he doesn't recieve the credit he deserves.

As far as crediting him to the start of "Gangsta Rap", I think he was the first to embody the rough and rugged lives on the inner city. He was speaking on reality. It wasn't his fault that it was taken a step further into an almost "fairytale" like exsistence.

Nice choice of track for him as well, that is my favorite song on my favorite Schoolly album (although Saturday Night is close behind).

I'll have to get my learn on with the other stuff. I actually just checked out that "Sweet Badasss.." last weekend for the first time.

Never been big on the Blackalicious stuff, although "Make You Feel That Way" off of "Blazing Arrow" is one of my favorite songs of this decade.

Bullion---Gratitude for the feedback, and props to you for getting paid to fuck off and read Souled On---I like that.

Trav---"Make You Feel That Way" is one of my favorite Blackalicious joints, too. I obviously like their music more than you do, but I prefer listening to their tracks when they're mixed in with other stuff. When I listen to one of their albums, I usually start getting antsy by the fifth or sixth song.

What you said about Schoolly was on point---he was like the ghetto CNN, except he spoke the truth.

I've always thought Sweet Exorcist and Got to Find a Way were great records - I did a post on them a few months ago, actually, and happened to choose "Make Me Believe in You" as a sample as well.

Still a huge proponent of Back to the World as Mayfield's finest hour, though.

nice to see someone posting and writing something about schooly d... great post as always... mike

yooooooo that ray bryant track is that ish!

i first heard this track on a david holmes mix and HAD to search it out.

damn. those horns at the end get me EVERY time.
PEACE

Who sampled that Ray Bryant? Or included it in a mix? It's so familiar it's killing me! Someone help...

flood---I can't disagree one bit with your appreciation for Back to the World. That record for me is a perfect marriage between politics and da funk. As always, you prove to have excellent taste.

Mike---All I can hope is that I got a few heads to turn Schoolly's way.

Some great stuff over @ Tomorrow lately, too...

Vik---I wish more people would have downloaded that Ray Bryant joint. You obviously hear what I hear---that shit is amazing.

Lily---It might be the David Holmes mix that Vik mentioned. If not, it was also sampled on "On the Run" by Kool G Rap. A UK hip-hop group borrowed it too, but I can't think of their name right now.