Making Nature Against The Law 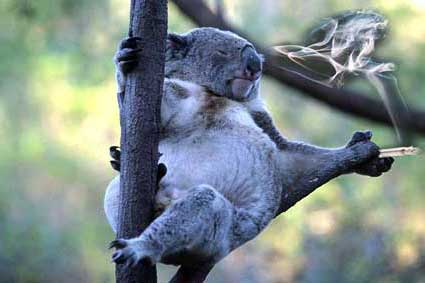 If you've never had the pleasure, I would highly recommend smokin' a tree in a tree. I can only hang out here for a short while, because otherwise, the natural enemy of the marijuana plant (conservative Republicans) will eventually force me out of my state of euphoria. They are extraordinarily talented at fuckin' up my fun---and I think they know it.

In the meantime, I'm leaving you with some exemplary linkage to occupy and satisfy---at least until my ass can move up off of this here branch:

From the polo fleece to the jesus piece is featuring a couple of joints from J Dilla's pending release, The Shining. Cop "E=MC2" (w/Common) and "Baby" (w/Madlib and Guilty Simpson): http://jesuspiece.blogspot.com/2006/06/ez-like-mathematics.html.

My friend Havas at A Three Minute Record just posted a noteworthy selection of hip-hop mp3s the other day. Download tracks by The Beatnuts, Pep Love, Black Moon, The Roots, NWA, Del, J-Live, OC, Pharoah Monch, J-Zone, Doug E. Fresh, and probably one or two others I forgot to mention: http://athreeminuterecord.com/2006/06/perfect.html.

For some quality soul/gospel recordings, head over to The Daily Growl, where you can download songs by Aretha Franklin ("Lee Cross"), Clarence Smith ("Sometimes I Feel Like A Motherless Child"), and Voices of East Harlem ("New York Lightning"): http://thedailygrowl.blogspot.com/2006/06/soul-gospel-sunday.html.

Download "Summer Madness" by Kool & the Gang, courtesy of my dude Obi at Soul on Ice. Those Terri Walker tracks he posted are pretty damn nice, too: http://obifromsouthlondon.blogspot.com/2006/06/akwaaba.html.

I don't know about you, but "Solitude" has always been one of my favorite Billie Holiday songs. Luckily, you can download it at Chasing Red, along with other tracks by Miles Davis, Jimmy Cliff, Fats Waller, De La Soul, Sam Cooke, Ahmad Jamal, and more;
http://chasingred.livejournal.com/162008.html?mode=reply.

Diddy Wah often posts some stellar song choices, and right now, one of them is Wilson Pickett's version of "Hey Joe": http://diddywah.blogspot.com/2006/06/way-it-was.html.

At Eric's Archives, you can currently cop quite a few joints blessed by
legendary production crew Da Beatminerz:
http://ericsarchives.blogspot.com/2006/06/brothers-and-beatminerz.html.

In related news, The Broke BBoys are featuring a couple of joints from Boot Camp Clik's upcoming release, The Last Stand---"Yeah" and "Trading Places":
http://brokebboys.wordpress.com/2006/06/20/boot-camp-clik-takes-the-last-stand/.

The Stepfather of Soul recently posted two quality tracks by Bobby Blue Bland ("Farther On Up the Road" and "God Bless the Child That's Got His Own"), as well as Little Milton's "More and More":
http://stepfatherofsoul.blogspot.com/2006/06/get-on-down-with-bobby-bland-from.html.

You can cop a couple of Nas joints at Rebel to America right now---"Hardest Thing to Do Is Stay Alive" and "You Don't Know". Musically speaking, these tracks are incredibly similar, but Escobar made both songs unique by spitting different rhymes on each of them : http://escobartheory.blogspot.com/2006/06/escobar-season-pt-iii.html

If you've ever taken acid (or any other psychedelic drug, for that matter), you may have a special appreciation for this particular link. Check out "The Surreal, Fantastic Realism, Psychedelic & Visionary Artists of the 21st Century Gallery of Links:
http://surrealartforum.com/artlinks.htm.
Some of these works of art are amazing, while some of them may have you sleeping in your mommy's bed for a few nights, until the bad dreams and the closet monster finally disappear. Since I have no way of knowing how thuggish you are, you have to enter at your own risk...

Another soul song I have much love for is "Four Walls" by Eddie Holman, which is currently available at The Number One Songs In Heaven. You may also want to give "Keeper of the Castle" (The Four Tops) a spin, as well as Maurice & Mac's "You Left the Water Running": http://www.londonlee.com/2006/06/keep-on-moving.html.

Cop "Lonely Avenue" by Ray Charles and "I Want to Be Your Mother's Son-in-Law" by Macy Gray at The Late Greats:
http://staergetaleht.blogspot.com/2006/06/saturday-spotlight-on-soundtracks-from_24.html.

I've said it before---I'm not a huge fan of the whole rapper beef bullshit. However, I still kinda like "War with God", which is three minutes and nine seconds of Ludacris talkin' much shit about T.I. I don't really give a damn who "wins" this one, but this track is pretty dope regardless---cop it at The Rap Up: http://therapup.blogspot.com/2006/06/shots-fired-ludacris-vs-ti.html.

Since I'm up here in the Tree of Life philosophizing, I figured that I'd go out on a limb, and drop a little knowledge on your head:

"Bush is a natural-born loser with a filthy-rich daddy who pimped his son out to rich oil-mongers. He hates music, football, and sex, in no particular order, and he is no fun at all."---Hunter S. Thompson

"There are two people in the world that are not likeable: a master and a slave."---Nikki Giovanni

"Life can only be understood backwards; but it must be lived forwards."
---Soren Kirkegaard

"For every prohibition you create, you also create an underground."
---Jello Biafra

my smoking days are over and all my vices are legal, but i can appreciate the wimsy... I satisfy my aggression against our shared natural enemy by take pot shots at the administration in my class lectures.

i get links from this site, (i'm sure you are aware of it)

also a couple artists i think might be up your alley

Also, just wondering, did ya get an email from me this week? I sent it to the email address in yr profile, figuring that would be the easiest way.... let me know here or on my blog if ya get a chance.

Firpo & JT---sorry it took me so long to respond. I was out of town for a couple of days, and couldn't access the internets.

Firpo---Just got back, so I haven't checked the links yet. I definitely will though, and gratitude for making some suggestions.

I think it would be quite an experience to take one of your classes. I'd bet large sums of money that your pot shots at conservatives are f'ing hilarious.

JT---I didn't get your e-mail---just checked. I did, however, get an e-mail from someone named Raoul, who's selling Viagra online for only ten cents per pill. I'm assuming that's unrelated ;) Would like to hear from you, though---I'm going to try to drop a line at your addy. If not, my address is poetic_one72@hotmail.com.

It's all good Scholar. I just sent it again from my other email account, so keep yr eyes peeled [it's a little time-sensitive, but not too much].

I got my first electronic cigarette kit from Vaporfi, and I recommend getting it from them.