I'm A Real Rebel With A Cause 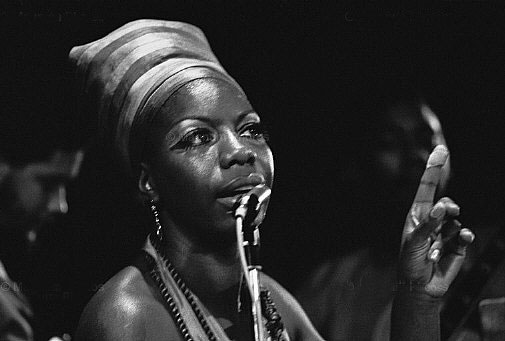 It goes without saying that Jesus is a tough act to follow. No one I can potentially write a post about today could possibly compare to his iconic status, overall influence on Western culture, and/or omnipresence in the majority of our lives. Despite, or perhaps because of, this acknowledgement on my part, I realized that I'd better center this post around someone pretty fuckin' outstanding. The person I chose to fill those extraordinarily large shoes is the amazing presence who called herself Nina Simone.

When I first started really listening to Nina, it was about fifteen years ago, and her music immediately became an integral part of the sountrack to my life. I ravenously pursued every one of her recordings, and tried to encourage my clueless friends that there was more to life than Paula Abdul. I also took an interest in her personal history, seeking out whatever biographical information I was able to acquire. Most of what I read seemed to indicate that Nina was difficult, demanding, and even somewhat obsessive. As a loyal fan, I never once gave a shit. Her talent was so phenomenal as to render these implications insignificant, and I reasoned that in our society, creative types are often viewed as relatively insane. Additionally, I thought it was quite possible that she was at least partially misunderstood. She was involved in the civil rights and feminist movements, and never hid her contempt for the evils of America's capitalistic greed. In her day, espousing such viewpoints was perhaps even more dangerous and isolating than having a dissenting opinion is today.

However, one of the few things I disagreed with her about was her rather unfavorable impression of rap music. Don't get me wrong---I can relate to her distate for the overabundance of booties, bitches, and bling. My only wish is that she would have had more appreciation for the roots of the genre, and seen it as the avenue for celebration, self-expression and social protest that hip-hop was in its original state. Of all people, she should have understood why rap changed drastically when it got hijacked by corporate America, and seen how the intrusion of greed ultimately weakened and diluted the essence of a completely viable art form.

That said, when we love someone or something, we often have to be willing to overlook certain flaws. I feel her in my soul to this very day. When Nina died, I lost a very dear friend. Whether or not you share my enthusiasm for her work, I am hopeful that I can foster some appreciation for her magnificence through my unabashed admiration and respect. Here are some links that can assist you in becoming better acquainted/annointed:

Download her song "Lilac Wine", and the Masters at Work remix of "See-Line Woman" at The Rich Girls Are Weeping:
http://therichgirlsareweeping.blogspot.com/2006/05/these-are-few-of-our-favorite-things.html.

A few Nina quotes to serve as some mental sustenance for the day:

"I think the rich are too rich and the poor are too poor. I don't think the black people are going to rise at all; I think most of them are going to die."

"I think the rich will eventually have to cave in, too, because the economic situation around the world is not gonna tolerate the United States being on top forever."

"Slavery has never been abolished from America's 'way of thinking'."

As I transition into the rest of the links for this post, I feel that Nina's strong social and political views flow directly into the spirit of the following video. Peep "Abolish The N Word", and see what you think:
http://www.abolishthenword.com/.

Download a couple of songs with a political/anti-war theme at The Stepfather of Soul---"And They Say Don't Worry" (Clarence Carter) and "We're on the Road to Hell" (Ron C): http://stepfatherofsoul.blogspot.com/2006/05/things-are-getting-better.html.

From the Polo Fleece to the Jesus Piece has some of that Busta Rhymes crack that people have been fiendin' for lately. Cop "You Can't Hold the Torch" (produced by J Dilla, ft. Q-Tip), as well as Jaylib's "Smootherness":
http://jesuspiece.blogspot.com/2006/05/ignore-last-post-doggies_30.html.

The Fleece also recently posted another new Busta offering---"Get You Some" (w/Q-Tip again, this time produced by Dr.Dre). Although this post credits the track's production to Dilla, more recent intelligence strongly implies that it's actually a Dre joint:
http://jesuspiece.blogspot.com/2006/05/and-only-good-thing-to-come-out-of.html.

However, my personal favorite from the new album (so far) is "Goldmine" (w/ Raekwon), which you can cop right now via Spine Magazine: http://www.spinemagazine.com/index.php?task=.

Download "Fire" by The Ohio Players, just because it's fun, damn it:
http://staergetaleht.blogspot.com/2006/05/saturday-spotlight-on-soundtracks-from_27.html.
And why the hell not?---a YouTube video of the group playing this song live: http://www.youtube.com/watch?v=_LPcYJaGxNU&search=ohio%20players.

Berkeley Place is planning to feature three different posts on the "A to Z" of MF Doom. Two of them are already available (as of this writing), and both feature an eclectic variety of his joints in mp3 format:
Post One: http://berkeleyplace.blogspot.com/2006/05/mf-doom-to-z-post-one-of-three-updated.html.

MF fans may also want to head over to Gorilla vs. Bear, where you can download DangerDoom's Occult Hymn EP:
http://gorillavsbear.net/.

Good Hodgekins recently posted an array of cover songs, most notably "Take Me to the River" (Al Green) and "We Can Work It Out" (Stevie Wonder): http://www.goodhodgkins.com/2006/05/30/the-music-blogosphere-presents-exceptional-cover-songs/.

I'm 100% for the interracial love thang, but this couple that Obi posted at Soul On Ice looks absolutely rifuckindiculous: http://obifromsouthlondon.blogspot.com/2006/05/joke-right-get-outta-here.html. These two make Flavor Flav and that big white wildebeest he dated seem compatible by comparison.

"Africa Dream" by Talib Kweli and Hi-Tek is available at disco-not-disco: http://speedrail.blogspot.com/2006/05/you-dont-need-weather-man.html.

You can score quite a few classic mp3s at Lil Mike's Last Known Thoughts & Random Revelations. Download tracks by The Dells, The Dramatics, The O'Jays, Bobby Womack, The Whispers, and more: http://lilmikesf.blogspot.com/2006/05/tales-of-stone-sould-out-picnics-iraqi.html.

I realize that I just mentioned Zion I recently, but new tracks from their upcoming LP are now available at I Guess I'm Floating---"Yes Yes" (w/ Gift of Gab and Lyrics Born), as well as "Live 4 Today":
http://iguessimfloating.blogspot.com/2006/05/but-wait-theres-more.html.

If you missed Gnarls Barkley's performance on Conan O' Brien's show, here you go, peoples---the video and the mp3 are up at Culture Bully: http://culturebully.blogspot.com/2006/05/gnarls-barkley-crazy-on-late-night.html.

Remember when Common still had Sense? Cop a couple of joints from Resurrection at Oh, Sweet Nothing:
http://sweetnothing025.blogspot.com/2006/05/common-sense-resurrection.html.

Download "Last Blunt" by The Coup at disco-not-disco:
http://speedrail.blogspot.com/2006/05/like-some-enormous-music.html.

I have less time than links at this point, so I'm gonna have to shorten this post a bit. However, I can't leave without posting a couple of Etta James mp3s---(these are for you, little bird):
"At Last" (via Mars Needs Guitars): http://marsneedsguitars.blogspot.com/2006/05/contest-black-heart-procession.html.
"Sunday Kind of Love" (courtesy of Soul Sides): http://soul-sides.com/2006/05/king-pleasure-betty-hutton-etta-james.html.
(I highly recommend checking out the other two songs included in this post as well).

A couple of shouts, and then I'm out:

Peace to random (http://wreck-noble.blogspot.com/), Feed Me Good Tunes (http://feedmegoodtunes.blogspot.com/), and Brown Eyed Handsome Man (http://browneyedhandsomeman.blogspot.com/) for recently linking Souled On...much gratitude. These are all really excellent mp3 blogs, so be sure to pay your respects..

I love Simone, Ohio Players, Womack, and that rendidtion of Jealous Guy is pretty great. (Yes, clearly I need to move into the 21rst Century- but this is a step closer than my previous American roots music obsession.)

As for the "N-word" flash- very powerful argument. I never use the word myself, but I guess some believe they can flip the meaning of a word by using it in a different way. I think that can be true. Like the way some people identify themselves as "Queer"- a word that was obviously originally intended to be a putdown. Of course the whole thing is much more complex than that...

I'm glad to hear that Jesus has improved his footwear, now to work on the problems of his followers.

I always identified with this guy a little more. (link swiped off someone at audiography)

My new url is

Firpo---considering that you're an educator, an A+ coming from you is quite an accomplishment.

I think that many of Jesus' followers are forever lost. Instead of using their moral compass as a guide, they are being led by a hateful and discriminatory agenda. Jesus is a cool guy, and he ain't down with none of that.

I've always had a certain sympathy with Judas myself. Allegedly, he was damned because he did it, but the rest of us would have been damned if he hadn't. Either way, it sucks to b him.

The whole concept of minorities redefining and reclaiming slurs used against them has always struck me as a controversy with valid points on both sides. You're absolutely correct---this is a highly complex and complicated issue.

As usual, I have many more questions than answers...

Boogs---thank God you're back. I updated my links list with your new URL.

I am sorry for this but I came across it and it seemed apropos.

Scholar -- you seriously deserve the linkage man. We love what yr doing over here, and I have to thank you for the appreciation of what we try to do in our own humble little place. You have a great ear man, not to mention discerning taste. You make this blog business look easy. Much respect.

Firpo---That song is totally fuckin' interesting and weird. I listened to it at least 14 times...(even though I hate the music). Never have I thought so deeply about the irony of Jewish people driving German cars...or whether or not I have the capacity to love someone as much as dykes love Lucy. You're officially at least as strange as I am...

I know its what everyone says but I really do love her version of "Here Comes The Sun." How can she sound so warm, comforting, and so melancholy, or is it just cautious optimism, at the same time? Truly a great artist. I dont even know how I ended up here but Im glad I did. All hail Nina.

Myrna---your comment inspired me to listen to her version of that song again today. Nina had an incredible chemistry of passion and emotion that was unique to her, and simply can't be emulated.

I don't know how you got here either, but I hope that you'll return ;)

That's a beautiful picture. It got the right click treatment. good work

Thanks for mentioning the pic. I actually did a lot of searching before I found an image that was gracious enough to do her justice.

Thank you also for linking me on the Okay Player forum. I got a decent amount of traffic from that---much appreciated. Respect is mutual.