I Be Spreadin' Knowledge...Keepin' My Third Eye Polished 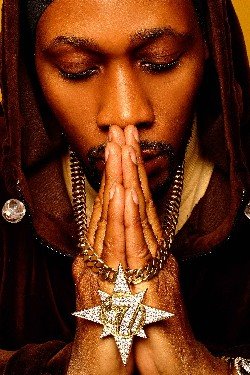 Four out of 5 dentists surveyed recommended that I make this post short and artificially sweet...

At Moistworks, you can currently download a few worthy hip-hop joints--"It Must Be Bobby" (RZA aka Bobby Digital), "Flatline" (Peedi Crack w/ Beanie Sigel), and "Roll With The Winners" (Clinton Sparks & The Clipse/Re-up Gang): http://www.moistworks.com/2006/06/roll-with-winners-clinton-sparks-that.html.

While RZA frequently gets due props for his production skills, I haven't encountered many hip-hop fans who think that he's particularly nice on the mic. I may not be able to influence your collective mind on this subject, but I offer this video of him freestylin' on BET as evidence that son can spit with the best (and worst) of them: http://youtube.com/watch?v=VRP3O9AI9_M&search=rza.

If you visited my post over at Miblog Weighs A Ton, you know that I'm a big fan of The Meters. At Afterbirth of the Cool, you can download yet another excellent track by them---"What'cha Say":
http://www.afterbirthofthecool.com/061106.html.

Visit FoeWeel !!! ??? to acquire a couple of great mp3s---"Blue in Green" by Miles Davis and "Uptight (Everything's Alright)" by Stevie Wonder: http://foeweel.com/2006/06/happy-birthday-foeweel.html.

Fans of old school "turntablism" are undoubtedly familiar with the three-part opus by Double Dee and Steinski currently being featured at Lost in the '80s. Cop "Lesson One: The Payoff", "Lesson Two: The James Brown Mix", and "Lesson Three: A History of Hip-Hop":
http://lostinthe80s.blogspot.com/2006/06/ya-played-it-for-her-you-can-play-it.html.

"Fight the Power (Pt. 2)" by The Isley Brothers is available at I Am Fuel, You Are Friends: http://fuelfriends.blogspot.com/2006/06/out-of-sight.html.

Download "I Heard It Through the Grapevine" by Marvin Gaye at Funtime OK: http://www.funtimeok.com/?p=334.

I can't think of a regular blog feature that I like more than Sample Wednesday at Palms Out Sounds. This week, it's all about original songs that were flipped by Freestyle Fellowship. Download mp3s of tracks by The O'Jays, Donny Hathaway, Run-DMC, Bootsy Collins, Sly & The Family Stone, The Delfonics, and more:
http://palmsout.blogspot.com/2006/06/sample-wednesday-11-freestyle.html.

Download Laura Lee's "I Need It Just As Bad As You" at The Stepfather of Soul. Funky, soulful, and simply amazing...
http://stepfatherofsoul.blogspot.com/2006/06/laura-lee.html.

Entertainment Weekly's list of the 25 most controversial movies ever:
http://www.ew.com/ew/article/commentary/0,6115,1202224_1_0_,00.html.
Make your next trip to the video store a revolutionary adventure...

Also at Freemotion, you can pick up a handful of Kool Keith joints. Cop "Ants", "Aliens", "Al Green", and "Trees": http://www.freemotionhiphop.com/freemotion/?p=185.

Does the term "net neutrality" mean anything to you? It should if you enjoy exercising your right to freedom on the internet. Scenestars recently did an excellent post explaining why "the Internet as we know it is facing a serious threat". Come on---even my readers who are permanently glued to their couches should be able to take some form of action this time: http://scenestars.net/2006/06/note-from-google-on-net-neutrality.php.

Cop the instrumental version of "Come on Feet" (Madlib/Quasimoto) at Spliff Huxtable: http://www.spliffhuxtable.com/?p=210.

If you slept on Gnarls Barkley's performance at the MTV Movie Awards, you can see it here:http://www.youtube.com/watch?v=5VCWJVvE0Fk&search=gnarls.

Bobby Blue Bland's classic song "Ain't No Love in the Heart of The City" is available for download at Badminton Stamps:
http://www.badmintonstamps.com/zarchive0606.html#559.

Perhaps the best mp3 post I found this week came courtesy of random. Download an impressive number of tracks by artists such as Lenny Williams, Isaac Hayes, Johnny "Guitar" Watson, The Deele, Quincy Jones, Les McCann & Eddie Harris, Bobby Byrd, Willie Hutch, and The Stylistics. Hip-hop fans may appreciate these songs as well, since most of these tracks have been scrambled, sampled, and flipped on famous rap joints: http://wreck-noble.blogspot.com/2006/06/week-29-i-know-you-got-soul-part-one.html.

Before I go, thought I'd let you know that tomorrow, I'll be blazin' blunts and gettin' lifted in honor of the first anniversary of this blog. Truth be told, Souled On was never supposed to last longer than one day. There wasn't an ounce of premeditated thought involved---can you tell??? I got trashed one day, and started something that I evidently haven't finished yet.

Much gratitude to all of the wonderful sites and blogs who have supported Souled On this past year (you know who you are). To my loyal readers, I appreciate each and every one of you---especially those who take the time to occasionally drop me a line or two. If it weren't for you, I'd have been ghost a long time ago.

Happy anniversary. Its been a quite a year.

congrats on passing the 1-year mark! that's a huge accomplishment in the blog game. props!

scholar- congrats on your accomplishments!

thanks for the links.

here is a particularly good bit from from the colbert report:

in case you missed it.

"the best congress money can buy" i guess

Anon, ZK, and Ice Man---thanks for the encouragement. And ZK---I'm kind of surprised I've lasted this long in the blog game, too. I have the attention span of a fruit fly between blunts.

Firpo---
Thanks for the link---hadn't seen that yet. Also, special gratitude to you for holdin' things down every time I post. You keep me in touch with the fact that there's real people out there reading this damn thing. Peace.

Scholar,
I can't believe it's been a year-what a crazy year! You know i'm one of your biggest fans. I love you and I miss you.
Miss Maple

We celebrated 6 months in the game over at Dilated Choonz recently... what started off as a short-term promotional tool for a party we were throwing now (like Souled On by the sound of it) seems to have taken on a life of its own.

Anyway, keep up the good work!

And nice one for posting Stormy over at MWAT - I used to have it on a tape but haven't heard it for years... had forgotten how awesome The Meters are at their best.

This blog is great. just don't ever leave.

bought the instrumental version of "the unseen". a gem

Kev & Obi---thank you both for linking me on your sites. I respect both of you to the 100th power.

Maple---Much love. You've been around for the long haul. Thanks for your loyalty, sis ;)