Everybody Move To The Back Of The Bus 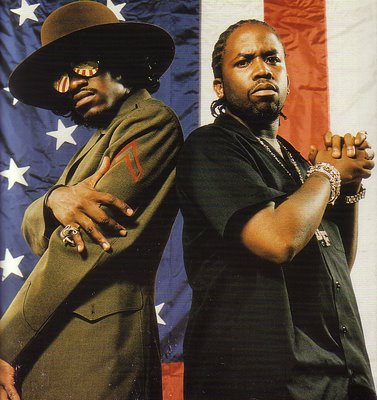 If you're a hip-hop fan who spends a lot of time cruisin' around the internets, then you probably already noticed that two new Outkast mp3s ("Idlewild Blues" and "Morris Brown") have appeared on quite a few sites/blogs this past week. In reading comments posted by other visitors, I was marginally surprised by the high volume of negative feedback on the musical direction that the group has taken in recent years. A lot of people remarked that they had hated Outkast since Stankonia, while others expressed the sentiment that "they've sucked since Andre 3000 went all Prince and shit". I'm familiar with this mentality, because for example, most of my friends who like Goodie Mob would rather put a chainsaw in their ass than listen to Gnarls Barkley.

There are obvious reasons why Outkast may be pushing a lot of rap fans past their collective comfort zone, but hopefully that fact alone isn't the overriding reason why so many people are dissing them now. If hip-hop is to survive as a viable art form, it definitely needs room to breathe outside of the parameters and constraints that many heads seek to impose on it. Too narrow of a vision of hip-hop will enslave its future possibilities, and literally, will leave it permanently seated at the very back of the musical bus. As much as I have disliked the direction that some of my favorite artists and groups have gone (can I get a Black Eyed Peas up in here?), I still accept that change is a necessary part of music's evolution. I might end up using some of Madlib's more abstract side project CDs as coasters, but I respect the man's right to go with the flow of his creative process. If artists aren't allowed this freedom, the possiblity of encountering anything wonderfully original is all but erased.

It's usually much more annoying to me when musicians turn their success into a formula that they recycle into infinity for the sake of guaranteed sales. That concept has seriously injured pop music in general, and to say that commercial rap is in jeopardy of becoming just as generic is a magnificent understatement.

Admittedly, I don't prefer either of of these joints to most of the material on Aquemini or ATLiens. I'm still working on a final verdict, but it doesn't really matter, because you should form a conclusion of your own. You may genuinely hate these songs, but if you do, hate them because you think they suck, and not because they just ain't "Rosa Parks".
"Idlewild Blues" and "Morris Brown" are both currently available for download at Nah Right.

A handful of Gang Starr videos to help you pass the time:
"Manifest"
"Dwyck"
"You Know My Steez"
"Step in the Arena"
"Code of the Streets"
"Jazz Thing"
Yo! MTV Raps appearance w/ Nice & Smooth

Mars Needs Guitars is featuring an extensive collection of classic reggae tracks by the likes of Bob Marley, The Upsetters, Slim Smith, Junior Bytes, The Untouchables, and more.

A lot of people hate mash-ups, and at least as many people are tired of hearing Gnarls Barkley's "Crazy" get rehashed in all sorts of unspeakable ways. Despite this fact, when Dave Nada blended the most-talked-about-song-so-far-this-year with Angie Stone's "Wish I Didn't Miss You", the end result was reasonably satisfying. Cop it via Analog Giant.

Ever heard of Rashid Hadee? If not, you aren't alone in your ignorance. Briefly, he's one-half of the hip-hop duo Chapter 13, and he's produced tracks for artists like Common and Special Ed. He names several A-list producers as his primary influences---Dr. Dre, Pete Rock, Madlib, and DJ Premier, just to name a few. Son may not quite be at that level quite yet, but he definitely has some gems in his discography. You can score several free joints (featuring his beats and rhymes) at Download.com.

If you've never heard "Souvenirs" by Bettye LaVette, you need to Get On Down With The Stepfather of Soul!

Nordy just did a great post over at Miblog Weighs A Ton, featuring a track from De La Soul's new Mission Impossible mixtape---"Freestyle (Dat Shit) 2006". The joint is a remake of Diamond D's hip-hop cult classic "Freestyle (Yo, That's That Shit)", which is included in the post along with the George Benson song ("Footin' It") that provided the foundation for both of these joints.

In another recent post at MWAT, you can cop yet another Mission Impossible gem---"What the Fuck #3 (De La Slow)". This one is accompanied by The Beastie Boys' "Flute Loop", as well the original song that both groups sampled---"Flute Thing" by Blues Project. Link up with these joints here.

If you like Eddie Bo half as much as I do, be sure to check out "Hook and Sling" at Soul Sides.

Once again, Sample Wednesday at Palms Out Sounds offered a generous selection of mp3s. The featured artists this week were Raekwon and Ghostface. Download mp3s by Luther Ingram, Gladys Knight & The Pips, Syl Johnson, O.V. Wright, The Emotions, Teddy Pendergrass, and Black Ivory.

More sample goodness is available at Recidivism. This particular post includes "Cold Sweat" and "There Was A Time" by James Brown, as well as Chubb Rock's "Treat 'Em Right", which featured a sample of the latter track.

Download "Long Time" by The Roots (feat. Peedi Peedi) at The Rap Up. By the way, the whole Peedi Peedi thing isn't nearly as bad as it seems.

I can't urge you strongly enough not to sleep on these two tracks---cop "Drunk Man" (Eddie Harris) and "Loose Booty" (Sly & The Family Stone) at short term MP3 loss.

A few things in honor of Independence Day:

Don't sleep on the holiday post over at Trees Lounge, including over 700 songs about 23 of the 50 states. Download tracks by Louis Armstrong, Outkast, Alicia Keys, Solomon Burke, Ray Charles, Kool & The Gang, Public Enemy, Muddy Waters, Dr. Dre, The Jackson 5, Ella Fitzgerald, Irma Thomas, James Brown, The Meters, and many, many, many, many more.

Marvin Gaye's rendition of "The Star Spangled Banner" is available at Living In Stereo.

While it's not for the easily offended, I still find my own post from July 4, 2005 to be relatively amusing. I think I may have only had about 3.4 readers back then, and one of them was my goldfish, Killer. Ego's a bitch, kids...
Posted by Scholar at 4:20 PM

A genius point: "I might end up using some of Madlib's more abstract side project CDs as coasters, but I respect the man's right to go with the flow of his creative process."

hey Scholar, I appreciate the linkage to Mars!

Nordy---thanks for the props. Those De La posts were great, too, by the way.

Merz---you're more than welcome. I have a definite soft spot for old school (or roots)reggae. Thanks for sharing the tracks.

Regardless of how I feel about Outkast, ya hit the nail on the head.

People gave Radiohead a lot of bullshit when they didn't make OK Computer II, or Neil Young for not making Harvest 2.0... there are a million-and-one examples to draw on.

Change isn't just necessary in music and as part of the musical/creative process, it's necessary in life. Love the artist for why they do what they do, even if ya don't like the specifics.

Music would be fucking boring if every band/producer/DJ/artist stuck to their old dog tricks instead of branching out a little.

If Madlib put out a country/western disco LP, I bet I would still shell out 15+ bucks to see what it was like.

all this madlib love man! lol. just re-listened to "planned attack". he is a genius.

JT---I can relate. If Madlib did a Quasimoto opera infused with polka and techno, I'd be there, too. There's something to be said for loyalty, I guess. I'm still waiting to catch his drift on the whole DJ Relms thing, but I'm tryin', I'm tryin'...

Obi---appreciate the props. You know Soul On Ice is one of my favorites, so the respect is mutual. 1...

i wrote a post the other day, but i guess it didn't take. in reference to your previous july 4th post- i just wnated to ad the the declaration on independance was drafted on hemp and both washington and jefferson grew pot. so it's also downright anti-american to be against the leagalization of pot.

JT---Not that it's important, but I meant DJ Rels in my earlier comment. So much for my proofreading capabilities...

Firpo---I was wondering where you were...Anyway, good point about the Constitution and hemp. Between 1763 and 1767, farmers in Virginia actually faced jail time if they didn't grow hemp in times of shortage. Weed has only been illegal for about 1% of the time that it's been in use. It figures that had to be during my lifetime...