Feel Me From Where I Am To Wherever You Are 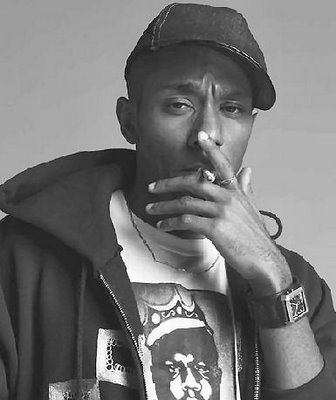 It's been yet another entertaining week in the world of music, art, politics, and life. Let's do this damn thing...

Beyond the shadow of a doubt, the most overblogged song of the week was "Show Me What You Got"---the new Jay-Z single from his upcoming Kingdom Come LP. I'm ordinarily rather hesitant to embrace the hype when it comes to mainstream hip-hop, and let's face it--Hova is pretty much the McDonald's of rap. Despite this fact, I became a Jay-Z fan several years ago, through a process that can only be described as Jiggafication. I manage to find a way to excuse the excessive commercialism, the industry politricks, and even the lame-ass songs he does with Beyonce. Bearing that in mind, the best thing I can think of to say about this track is that it doesn't totally suck...just mostly.

I could get my thesaurus out right now, and start building a pseudo-intellectual argument to support my opinion, but why waste the time? Truth is, I'm still going to buy Kingdom Come the very day it hits the shelves. Bloggers, critics, and eggheads worldwide are going to spend countless hours lamenting the fact that this record doesn't measure up to Reasonable Doubt. Well, no shit...I ain't never been as high as the first time I smoked some greens, but I'm still puffin', aren't I? Think of this Jay-Z joint in much the same way, and you won't even have to think about pondering its worthiness...I promise.

Anyway, for all my cellar dwellers in the place to be, you can cop this track at a billion different locations. I'm providing a link to the post at Soul Sides, because O-Dub was kind enough to include the songs by Johnny Pate and Afro Lafayette Band that Just Blaze sampled on the track.

If you love funk and/or soul music, then you probably know a thing or two about Shuggie Otis. If it's not already part of your collection, make sure you pay a visit to Tuwa's Shanty to download "Aht Uh Mi Hed".

Nah Right featured a couple of killer "stray shots" this past week---"Undeniable" by Mos Def and "Josephine" by Dj Hi-Tek w/ Ghostface.

Download "Get Up and Get Down" by The Dramatics at Funky 16 Corners.

Today's "what the fuck?"---Congress wants to know if they've molested you.

And while we're discussing the many ways in which sex and government are inexplicably intertwined---is it just me, or has the GOP been spending an extraordinary amount of time both in and out of the closet lately?

The Mark Out is featuring what Ben describes as "a tight little mix of original soul tracks as sampled by the Wu-Tang---both solo and as a group".

Head over to Berkeley Place to cop a fistful of Dr. Dre rarities.

Before The Ohio Players got all funked up, their style was more akin to soul and R&B. "Here Today and Gone Tomorrow" is a phenomenal track that they recorded in 1968---download it courtesy of Darcy at Feel It.

Regulars around here already know that I love both album covers and stuff that's bizarre. The two finally meet here, where Billy Joel fires shots at Rick James, but it's Eminem who ultimately kills him. Whoa...

Download songs by Nina Simone, Bill Withers, and Little Milton via this post at Moistworks. You should also stop by there to cop "Fuck What U Heard" by the incredible Diamond D.

If you're not already part of Vikter Duplaix's "love movement", you may want to get familiar. His new album Bold & Beautiful is perfect mood music---whether you're makin' babies...or just relaxing. I uploaded "The Way That I Feel" so that you can experiment freely---d/l the track via SendSpace.

The man JT at Feed Me Good Tunes recently posted some stellar soul joints by the likes of Betty Wright, Gene Harris & The Three Sounds, The Manhattans, The Trammps, and The Sylvers. Hip-hop fans also need to recognize--- these tracks were all sampled in joints by J Dilla, Madlib, and RJD2.

As I mentioned recently, I've been mining the internets for even greater musical treasure than what I discover at my usual "hot spots". This week I came across a few dope hip-hop spots that I wanted to give some shine. I'd love to offer a detailed description of each, but I need my fuckin' beauty sleep. Here's the links, and I'll let you handle the rest:

all up in your earhole

Also, peace to DJ Uncle Rico and It Happened In London for the links.

"Anywhere is walking distance, if you've got the time."--Steven Wright
Posted by Scholar at 11:53 PM

Thanks for the props for my site (ego-trippin). Been getting a lot of referals from this post on your blog. Will add you to the links on my side-bar.

Keep up the good work!

I'm a little scared of what to expect from Jay-Z. Yr analogy is spot-on, he is kinda the McDonalds of the scene.

But ya know, for every shit-inducing, stomach-ache making mcmuffin on the roster, sometimes you get a good big mac, and it makes the whole agonizing process seem worth it.

[PS. good find on the ohio players link... I've always found them sickly sweet, a little too much so, but this is a real spoonful of medicine.]

I got a chuckle out of Jay-Z being the McDonalds of rap, cause it's so true. Nice.

Thanks for the O-Dub link, I've always wanted to track down the sample source for those damn horns.

JT---One can only hope that Jay will be servin' more Big Macs than McMuffins this time---great comparison.

That Ohio Players joint made my whole fuckin' day, so I know how you feel.

Travis---it's good to know I'm not alone in my perceptions. Gratitude for stopping by again. WYDU is part of my daily rotation.

Tomorrow---you've got some excellent content on your blog so far. Switch up the title of your posts once in a while, and I might be souled.

JT - I agree with what you say about JayZ. Nobody in the "hardcore scene" wants to admit but secretly deep down we all know he is one THE best rappers of all time. His style, flow, delivery & vocabulary range are above what many of today's artist are capable of.

Scholar - I've returned the favour over at my blog, biggin up your site in my latest post!

Well, just like McDonalds, I like Jay Z, it's kind of a guilty pleasure. Honestly, I don't really see why there is alot of hate toward. I mean,yeah, he has some crappy joints (That Blueprint 2 shouldn't have even been an EP, let alone a double album), but he has some I really enjoy as well. I'll get bashed for this all the time, but as far as actual albums, I prefer Jay over Nas. Nas has some better songs (when he feels like making them), but overall albums, give me a Jay album over a Nas album.

I own every Jay album (except for that blasted Blueprint 2), bought them all new. I haven't bought a NEW Nas album since "It Was Written". I've bought most of his stuff used, meaning, I don't rush out and buy it, and I still have never bought "Streets Disciple", heard it online and didn't like it really.

That being said, I wouldn't call him the best MC ever, but yes, his flow is wicked. I think it's just "cool" not to like Jay, which just illustartes how many people are sheep and can't make up their own mind. Enough of my ranting.

thanks for the shout out. i'm feelin the site. let's do some link swaps.