Use Me...But Leave My Mind Alone 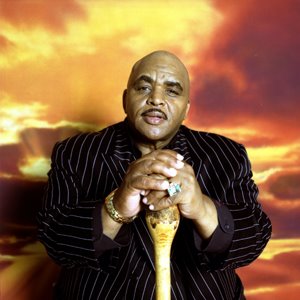 Earlier today, I randomly asked several different people to identify the man in the picture above. No one even came close to arriving at the correct answer, but I did receive a few interesting responses along the way. The most bizarre guess was Britney Spears, which of course, was a particularly stupid answer. After all, there's no way that this guy would have been idiotic enough to bear offspring with Kevin Federline.

I know that the suspense is now killing at least a few of you, so for those of you who are as perplexed as my mentally challenged sampling pool, this dude is none other than Solomon Burke---the self-proclaimed King of Rock 'N Soul. I would love to sit here and drop some knowledge about the man's legendary contribution to the world of music, but as usual, I have quite a bit of linkage, and very little time. If you're interested, you can receive a wealth of information from his official website: http://www.thekingsolomonburke.com/.
You can also download his song "What Am I Living For?", courtesy of The "B" Side. I can't say enough wonderful things about this particular recording, and if you enjoy the track, don't hesitate to further explore his discography. I can almost guarantee that you won't have any regrets:
http://redkelly.blogspot.com/2006/05/solomon-burke-what-am-i-living-for.html.

Speaking of Etta James, I've always liked her music, but my girl Nichele has so much love for her that I've developed an even greater appreciation for her unique style and sound. You can download another one of her songs, "The Wallflower" (w/ The Peaches) at Looking at Them. This song is part of a relatively large post, which includes a variety of tracks from a Rhino compilation called Respect: A Century Of Women In Music. Download other classics, such as "Nobody Knows You When You're Down and Out" (Bessie Smith), "Show Some Emotion" (Joan Armatrading), "Hello Stranger" (Barbara Lewis), "Bold Soul Sister" (Ike & Tina Turner), "Remember (Walkin' In the Sand)" (The Shangri-Las), and more:
http://lookingatthem.blogspot.com/2006/05/random-classics.html.

The music of Joan Armatrading is being featured at Breath of Life this week. Included is a live version of her song "Tall in the Saddle", as well as mp3s of two of her tracks covered by other artists (Corrine Bailey Rae and Letta Mbulu):http://www.kalamu.com/bol/.

Also at Analog Giant, you can watch the video (divided into three parts) of Stephen Colbert's brilliant speech at the recent White House Correspondents Dinner. Yes, this has been widely circulated around the internets, but this is for my peoples in the cave:
http://analoggiant.blogspot.com/2006/05/colbert-white-house-dinner.html. Props to my loyal reader Firpo for mentioning this in the first place.

Once you've witnessed what Colbert had to say, you'll want to check out Dubya's response at George Bush Is My Friend. Read this satirical e-mail, entitled "Stephen Colbert Can Eat My Ass":
http://www.satiresearch.com/go.asp?sid=47419.

Download Aretha Franklin's cover of "Satisfaction" by The Rolling Stones at Some Velvet Blog:
http://somevelvetblog.blogspot.com/2006/04/sunday-covers_30.html.

Hopefully, you've already read the extensive interview with Boots Riley (The Coup) at Cocaine Blunts, but if not---time to wake up, sucka:
http://www.cocaineblunts.com/new/index.html.

Just for the hell of it...a link to one of my favoritest Madlib vids---"Slim's Return":
http://www.youtube.com/watch?v=3FEinac7X4U&search=madlib.

I haven't liked too many of the collaborations between Sergio Mendes and (insert just about any rapper's name here), but damn...this one changed the Scholar's schizophrenic mind. Download "Yes, Yes Y'all" (w/Black Thought, will.i.am, Debi Nova, and Chali 2na)
at Dilated Choonz: http://dilate.choonz.com/index.php?id=303.

As always, Remix Sunday at Palms Out Sounds was dope. I was personally most impressed about the inclusion of two Pete Rock mixes ("It's A Boy" and Respiration"). However, you can also get a different spin on songs by artists such as T.I., Lil' Kim, Gravediggaz, Nas, and more: http://palmsout.blogspot.com/2006/05/remix-sunday-13.html.

Nas also happens to be the artist featured this week for Sample Wednesday at Palms Out. Cop mp3s by The Delfonics, Joe Chambers, Whodini, Grover Washington, Jr., etc:
http://palmsout.blogspot.com/2006/05/sample-wednesday-8-nas.html.

A couple of joints by The Procussions are up at The Broke BBoys---cop "All That It Takes" and "We Gotta! (Get Up)":
http://www.brokebboys.com/2006/05/procussions-on-rawkus-records.html.

Before I head back to the Mothership, I want to thank Cacophony and Coffee (http://cacophonyandcoffee.blogspot.com/), as well as Rebel To America ( http://escobartheory.blogspot.com/2006/05/roundup-pt-iii.html) for their support.

Just what I need this week to salved my frayed edges.

As for Colbert, it's been fascinating to hear what others have been saying about that speech. To me it's kind of a litmus test. If you don't think it's funny, well by my standards, you're on the wrong side.

If you like hearing about this stuff ad naseum (as I do) you might want to listen to this:

have fun on the mothership!

NF---glad that you're back from your blogging hiatus. The internets aren't the same without your wisdom, and quality song selections.

Firpo---I dig Solomon Burke a whole lot, too (obviously). His more recent recordings have slicker production, and lack that warm, scrathy quality that only vinyl can bring, but even his newer songs are still pretty wonderful.

I really appreciate when you drop comments. It lets me know that someone gives a damn. Otherwise, blogging can make you feel sort of autistic, like you're living in a self-contained world.

For these reasons, and many others, you're invited to kick it with me on the Mothership anytime ;)

I meant to say "scratchy"...but I'm a shitty typist, and even worse at proofreading.

But that could just be the beer talking.