Music Is The Art Of Thinking With Sounds 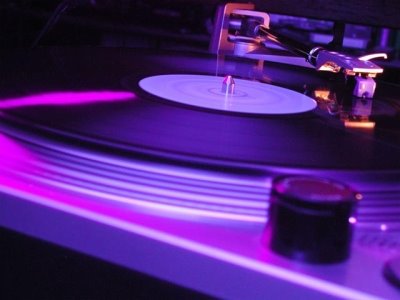 It just so happens to be one of those days. My personal rhythm seems to be out of synch with the motion of the cosmos, and I need music to help restore my inner balance...

You think I'm crazy, don't you?

Originally, I thought I might talk about politics in today's post. I sometimes enjoy being lied to, so I turned on CNN to see what's not exactly happening in the world. Is it just me, or is Nancy Grace's show on at least 23 hours a day? Even if you like Nancy Grace, you have to admit a couple of obvious truthisms about her: 1) She shows up more frequently than Jesus, Elvis, and Ryan Seacrest combined. 2) Her hair usually looks like it was styled by angry weasels.

I can't explain why or how, but Nancy Grace started this terrible downward spiral. Her omnipresence and bad hairdo evidently triggered something deeply rooted in my psyche, and now it seems that only music can save me. I don't know if the same sounds fix you when everything feels fucked up, but I'm willing to share what's goin' on in my headphones:

Sharon Jones' incredible cover version of "I Just Dropped In To See What Condition My Condition Was In" is available at Moistworks:
http://www.moistworks.com/2006/04/i-just-dropped-in-to-see-what.html.

Silence Is A Rhythm, Too recently posted "Grand Imperial" by Aceyalone. I felt really schizophrenic about some of the tracks on his latest LP (Magnificent City), but I haven't changed my mind about this joint for a second. Fuckin' impressive...
http://siart.blogspot.com/2006/04/leftfield-beats-aceyalone-is-very-busy.html.

This week, Sample Wednesday at Palms Out Sounds featured songs sampled on Bad Boy productions. Yeah---Sean Combs, Puff Daddy,Puffy, P Diddy, and (just) Diddy all pretty much suck ass. However, don't you dare front on this post. The majority of these tracks were sampled on classic Biggie joints, and that somehow compensates for the fact that Pee Shitty had anything to do with it. Download songs by Screamin' Jay Hawkins, Kool & The Gang, Diana Ross, Herb Alpert, The Ohio Players, Zapp, Grandmaster Flash & The Furious Five, Mtume, and more: http://palmsout.blogspot.com/2006/04/sample-wednesday-6-bad-boy.html.

When Apes Rule The Earth recently did a post on Barry White, and referred to him as "the McDonald's of love". That shit made me laugh. Countless love children in suburbia, the ghetto, and the trailer park are living proof of the cross-cultural sexual appeal of his recordings. Whether you consider that a gift or a curse, there's no denying the man's unique placement in musical history. There are several of his songs available for download, including "Can't Get Enough Of Your Love, Babe". The drums in that particular track have been sampled on joints by De La Soul, Nas, Big Daddy Kane, NWA, Eric B & Rakim, Ghostface, etc. :
http://randomapes.blogspot.com/2006/04/blog-unlimited-apes-favorite-barry.html.
Another recent post featured three songs by The Meters---"Just Kissed My Baby", "Jungle Man", and "Come Together" (a ridiculously funky Beatles cover): http://randomapes.blogspot.com/2006/04/meters-rejuvenation.html. "Just Kissed My Baby" has been fundamental to tracks by EPMD, Special Ed, Public Enemy, Bomb The Bass, Ultramagnetic MC's, Lord Finesse, and more.

For people who really like Nasir Jones, you'll be hyped about Rebel To America---an mp3 blog solely dedicated to Jigga's new best friend:
http://escobartheory.blogspot.com/.
All credit for this discovery goes to Straight Bangin': http://www.straightbangin.blogspot.com/.

If that gets you reminiscin' on the Illmatic days, you can download Nas' "Memory Lane (Sittin' In Da Park) at Cacophony and Coffee:
http://cacophonyandcoffee.blogspot.com/2006/04/poetry-thats-part-of-me.html.

Analog Giant recently posted underground hip-hop joints by artists such as M1 (of dead prez) and Five Deez. Also included are tracks from Stepfather, a forthcoming release by People Under The Stairs:
http://analoggiant.blogspot.com/2006/04/new-hip-hop-on-tuesday-dig.html.

Speaking of Five Deez, you can cop "What Happens (Remix)" and "Time Is Night" (a Fat Jon instrumental) at Ear Fuzz:
http://www.earfuzz.com/2006/04/five-deez-pt-1-early-years.html

I know my backpack is pullin' extra weight right about now, but fans of Chicago's independent hip-hop scene may want to check out those Pugs Atomz tracks at The Broke BBoys:
http://www.brokebboys.com/2006/04/windy-city-sessions-pugs-atomz.html.

Hopefully you already know a thing or two about Bernard Purdie---the man commonly recognized as the most recorded drummer in the world. In addition to his own catalogue of music, he's recorded with Aretha Franklin,BB King, Hall & Oates, Donny Hathaway, Marvin Gaye, Roberta Flack, Nina Simone, and too many other artists to mention. You can download his track "Hap'nin" at Last Night An MP3 Saved My Wife: http://lastnightanmp3savedmywife.blogspot.com/2006/04/bernard-purdie-hapnin.html.

Lately I've been sleepin' on the happenings over at Spliff Huxtable, so I'm not going to link to a specific post. Tracks/instrumentals produced by Diamond D and DJ Spinna have been featured recently: http://www.spliffhuxtable.com/.

You can download "Do The Funky Penguin (Part 1)" by Rufus Thomas
at Joe de Vivre. The drums on this track were sampled on a number of old school hip-hop joints, but younger heads will immediately recognize it as an element in "The Grain" by Ghostface Killah: http://www.joedevivre.com/blog/?p=73.

The Sole Life is featuring a couple of essential recordings by Roy Ayers---"Searchin'" and "The Memory". "Searchin'" has been a particular favorite of hip-hop producers, having inspired tracks by Mary J Blige, OC, Pete Rock & CL Smooth, Erykah Badu, Abstract Tribe Unique, Ed OG, etc. You can also cop "Mysterious Vibes" by The Blackbyrds, which has been sampled in tracks by Paris, Masters Of Illusion, and Kurious:
http://solelife.blogspot.com/2006/04/broke-in-session-2.html.

Hopefully you'll find something to help you out when you're having a fucked up day. Be easy...

"After silence, that which comes nearest to expressing the inexpressible is music."---Aldous Huxley

"Music is the movement of sound to reach the soul for the education of its virtue."---Plato

"When I hear music, I fear no danger. I am invulnerable. I see no foe. I am related to the earliest times, and to the latest."---Henry David Thoreau

"Music is my religion."---Jimi Hendrix

still, i have reservations about your view on nancy grace- i mean, without her who would help all the pretty, lost blond girls?

Anon---Forgive me, but I have a fairly solid theory promoting that Nancy herself has the Holloway girl tied up in her basement.

you are a fellow speculator/philosopher, too!

Great post, I've been looking for that Sharon Jones track for a while. And thanks for linking my Rufus Thomas post. If you're looking for anything in particular, let me know and I'll try to post it.

Joe---thanks. I'm really diggin' the blog. I've been trying to highlight some female soul singers, funky divas, etc. Pretty broad category, but a lot of female artists fail to get their props. No matter what, stay inspired about what you post--that alone will serve your readers well.
Thanks for stopping by.

You are right, here strange aircut cause me brain damage too.

I will give you a browser to find and install music easily. Get the best quality reviews. youtube mp3 music download