All You Jive Turkies Clap Your Hands 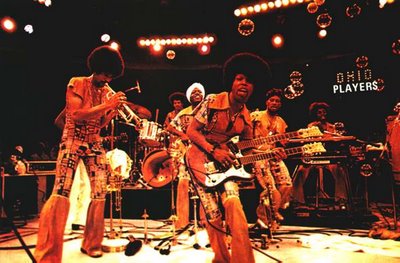 As you know, I've been in somewhat of a funky mood lately (in more ways than one). What better way to satisy my current mental state than listening to the groovy (that's right---I said it) sounds of The Ohio Players? I don't particularly feel like pretending to be a history teacher today, but if you aren't familiar with this group, or if you want to know more about them, this site can assist you in your quest for higher knowledge:
http://wfnk.com/ohioplayers/.
Also, you can download two of their songs at When Apes Rule The Earth---"Jive Turkey" and "Streakin' Cheek to Cheek":
http://randomapes.blogspot.com/2006/04/ohio-players-skin-tight.html.

I realize that I promised to quit with the whole Gnarls Barkley thing, but I smoke entirely too much ganja to be 100% reliable. Check out this video of them performing "Crazy" on Top Of The Pops:
http://www.youtube.com/watch?v=wcOabajz8I8&search=gnarls%20barkley.

Speaking of the song "Crazy", I don't think I'm quite ready for people to start doing shitty cover versions of this track quite yet. I knew that it was inevitable eventually, but damn...If you must subject yourself to the torture, MOKB is featuring two such renditions---one by Ray LaMontagne, and the other by The Kooks. They should both be charged with attempted murder as far as I'm concerned, but I'll let you be the judge and jury on this one. A better reason to check this post is that another Dudley Perkins joint from his latest LP is also included. Download "Come Here My Dear", and "Funky Dudley" (if you slept on it the first time): http://myoldkyhome.blogspot.com/2006/04/dudley-perkins-gnarls-barkley.html.

While we're discussing Otis and cover versions, his version of The Beatles' song "Day Tripper" is available at Some Velvet Blog:
http://somevelvetblog.blogspot.com/2006/04/sunday-covers_23.html.

As I stated in my last post, music is the most effective way I know to get my mind right in times of insanity/chaos/distress. Ever wonder what truly crazy muthafuckas listen to when they feel out of sorts? Check out the playlist on George Bush's iPod, and you'll be one step closer to an explanation:
http://www.thespeciousreport.com/2005/05050413bush_ipod.html.

Breath of Life did an excellent post on the music of James Brown this week. Download "Funky Drummer", his version of "Georgia On My Mind", and the Digital Johnson remix of "I Got You (I Feel Good):
http://www.kalamu.com/bol/.

Peep this YouTube of the NYC Breakers doin' their damn thing on a vintage Soul Train episode:
http://www.i-am-bored.com/bored_link.cfm?link_id=17032.

One thing that just doesn't make sense---shouldn't we want a really intelligent person to act as our Secretary of Defense? Aren't we afraid that the terrorists and Commies will get us if we put a silly retard in charge? This list of Donald Rumsfeld quotes should secure your confidence in the fact that our collective safety is in the hands of a complete moron: http://politicalhumor.about.com/cs/quotethis/a/rumsfeldquotes.htm.
"I believe what I said yesterday. I don't know what I said, but I know what I think, and well, I assume it's what I said." And people talk shit about weedheads...??? I'm scared of you, Donny.

In my last post, I mentioned my enthusiasm for "Grand Imperial", a new Aceyalone joint. That track, as well as "Everything Changes" (ft. Mystic) are available at callmeMICKEY: http://callmemickey.blogspot.com/2006/04/mp3quickie-aceyalone-new-limited.html#comments.

Also at callmeMICKEY, you can indulge in a couple of recent joints by Kool Keith (aka Mr Nogatco), two tracks from Mobb Deep's Blood Money LP, and "Vomit" by MF Doom. I can't fucks wit the new Mobb Deep stuff...no apologies. They've become a parody of their former selves. I don't particularly like the Kool Keith stuff either, although I tend to shift my perspective on his music upon deeper listening. "Vomit" is pretty dope...don't think I've ever made that statement before:
http://callmemickey.blogspot.com/2006/04/saturday-special-selections-ladytron.html#comments.

"I Get Along Without You Very Well (Except Sometimes)" by Nina Simone has been posted at To Die By Your Side: http://todiebyyourside.blogspot.com/2006/04/i-still-find-pieces-of-your-presence.html.

Peep The Coup's video for "Ride The Fence": http://www.youtube.com/watch?v=UygQejWPZoA&search=the%20coup.

Miblog Weighs A Ton is featuring some new, rare, and non-album joints by Little Brother: http://miblogweighsaton.blogspot.com/2006/04/good-news-out-of-durham.html.

Part 2 of the Five Deez series at Ear Fuzz has been posted. I hope you're all following along: http://www.earfuzz.com/2006/04/five-deez-pt-2-lets-make-dance-record.html.

At the aforementioned Analog Giant, you can download several mp3s by a few of the artists on Battleaxe Records. Cop tracks by Abstract Rude, Moka Only, and Swollen Members: http://analoggiant.blogspot.com/2006/04/its-not-golden-axe.html.

This blog has been around for several months, but I just checked it out for the first time yesterday. Visit Get On Down With The Stepfather Of Soul! Fuck a description---the title says it all:
http://stepfatherofsoul.blogspot.com/.

Alright, that's all for now bitches. My mom's callin' me and shit...it's after dark and all.

In case you were wondering, Nancy Grace is still living inside my television. I'm starting to think that my friends are secretly feeding her Snausages while I'm away...
Posted by Scholar at 9:32 PM

From what I understand you can curb Nancy Grace infestations by putting a stick of Juicy Fruit near their hole, which they can't resist. I guess it gums up their digestive tracts and they explode. Or is that gophers? Or wishful thinking?

On another note, what on earth is Rumsfeld smoking???

Thanks for the NYC Breakers vid. Ohh, those were the days.

Those LB tracks are hittin'...I've been staying away from Mos lately but that track is a banger.

Anon---very clever tip on exterminating the persistent presence that is Graceless Nancy. I'll let you know how it goes. I was going to experiment with your idea this evening, but all I had was Doublemint. Wasn't sure if that would work, because those blonde twins from the commercial would have probably rescued her. As you know, she has a conspiratorial alliance with all blonde chicks.

Not sure what Rumsfeld's smokin', but I want that connection. Unless of course, his supplier is Dick Cheney. That would explain a lot about that whole quail fiasco.

As always, thanks for the kind words...and your loyalty.

Boogs---glad you liked the Breakers video. When I linked it, I considered the probability that absolutely no one would be interested. Guess we're both a little old school, huh?

thx to you, my personal blog roll is ridiculously long

zk---thanks for taking the time to drop a line, and for your encouraging comments. It's great that you've found some blogs and music that you like through checkin' this site. I can only hope that no matter how obese your blogroll gets, Souled On will continue to be part of your rotation. Peace...

Please post more music from these guys, I love their style!