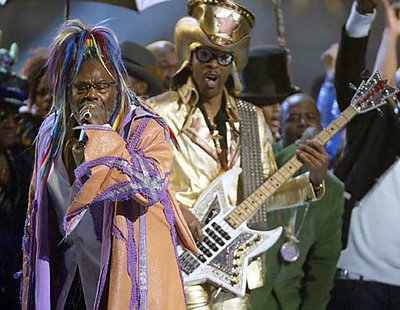 As you can see, Jesus and I returned home safely from our fantastic vinyl voyage. I didn't find anything as spectacular as I'd hoped, so I won't waste your precious time bragging about what I bought. Perhaps because I believed in Him, Jesus managed to guide me towards a few really good deals. Like my mama always said, leanin' on a pimp with a gangsta limp definitely has its advantages...

Anyway, I've actually accomplished a couple of things since returning to the crib. First of all, I updated my list of permanent links (aka Sites I'm Souled On). Be sure to pay my peoples a visit...

Secondly, I sat down at my computer for a very short while to see what's been happenin' on the internets. This is what I found...

At Feel It, you can download Parliament's song "All Your Goodies Are Gone". This track has been sampled on joints by artists such as Buckshot and Poison Clan, but it's perhaps most widely recognized as an element in Salt-N-Pepa's "Everybody Get Up". Originally, the song was recorded by The Parliaments, a group formed by George Clinton in 1955, many moons prior to the inception of Parliament or Funkadelic. That version is also included in the post, as well as an absolutely amazing rendition by a female singer named Joni Wilson. I would suggest copping all three mp3s: http://darcysfeelit.blogspot.com/2006/04/plenty-of-seats-available.html.

If you're interested in learning more about George Clinton, and/or the evolution of funk music, there are a few books you may want to consider reading: Where'd You Get That Funk From? George Clinton, Black Power, and the Story of P-Funk (by LLoyd Bradley); Funk (Third Ear: the Essential Listening Companion Series) (by Dave Thompson); and Funk: The Music, The People, and The Rhythm of The One (by George Clinton). I'm not going to provide your lazy ass with links to Amazon, because they make plenty of money without my humble endorsement. Remember the library and the independent book store in your neighborhood? Wouldn't it be revolutionary in the almighty age of the internet to consider choosing one of those options? That shit would be like...whoa...

While we're on the subject of funk...In a recent post, I talked about the influence of James Brown's Soul Sisters on soul, funk, and hip-hop music. I happened to come across the mp3 for Vicki Anderson's "I'm Too Rough For Mr. Big Stuff" at WFMU's Beware of the Blog. This song was included in an older post, but the download link is still valid, so get it while you still can. There are some other tracks in the same post that you may want to check out also, such as "I'll Bring It On Home to You" by Carla Thomas:
http://blog.wfmu.org/freeform/2005/08/spazzy_answer_s.html.

I also found a post on Lil Mike's Last Known Thoughts and Random Revelations that I've been sleeping on for over a month. Included are joints by Isaac Hayes, more songs featuring Carla Thomas, a few tracks by Sam & Dave, some classic material by The Staples Singers,"Passion" by Shirley Brown, "Chained and Bound" by Otis Redding, and many other musical gems. Again, despite my tardiness, the download links are still valid: http://lilmikesf.blogspot.com/2006/03/ikes-mood-hayes-gives-south-park-shaft.html.

Moistworks recently attempted to explore the history of relations between Blacks and Jews in the United States, and included songs by Louis Armstrong, Paul Robeson, Al Green, Barbra Streisand & Donna Summer to support this theme. I have mixed emotions about the article itself, but any post featuring Nina Simone's version of "I Shall Be Released" is somehow worth mentioning:
http://www.moistworks.com/2006/04/go-down-moses-louis-armstrong.html.

A recent survey of Iraqi women indicates that the majority of them feel that they were given greater respect under Saddam's rule than they've had since Iraq was "liberated". As far as I know, Reuters was the first to report this, but I chose to link to a more concise article on another site:
http://kavkazcenter.com/eng/content/2006/04/14/4600.shtml.

Perhaps part of the reason why our benevolent "freedom" mission has failed so miserably is because George Bush is fucking stupid. If you think that's a harsh or untrue statement, consider this video as evidence. Then, ask yourself this deep question: Even if George Bush, Jessica Simpson, and a turnip had been the only candidates in the 2004 presidential election, would Dubya have really been the wisest choice?: http://www.doubleagent.com/video.php?v=914&ct=37&cps=0&sb=mr.

While we're on a political tip for a second, let me mention that you can cop a couple of Paris joints over at B Sides Wins Again---"Lights, Camera, Revolution" and "The Hate That Hate Made (Power of God Mix)". Definitely an opinionated MC, Paris is loved by some, and dismissed by others as being a poor substitute for KRS-One and/or Public Enemy. That said, do with this as you will:
http://bsidewinsagain.blogspot.com/2006/04/paris-lights-camera-revolution-from.html.

Not too long ago, the internets had a love affair with DangerDoom, a project pairing MF Doom and DangerMouse with Cartoon Network's Adult Swim. Soon, you will be hearing a great deal about Adult Swim's latest collaboration, this time with Stones Throw Records. The album is slated for a September release date, and will feature tracks by Madlib, YNQ, J Dilla, MF Doom, Dudley Perkins, etc. Read more here: http://www.sohh.com/articles/article.php/8744.

R.I.P. to both Proof of D-12 and June Pointer of The Pointer Sisters. All of my readers know how fucked up I felt when Jay Dee passed away, but I'd be lying if I pretended that the death of either of these individuals had a similar personal impact. Out of respect for their many fans, however, I am linking a couple of sites who paid tribute to their legacies:
**Lil Mike's Last Known Thoughts and Random Revelations has posted a fairly detailed retrospective of The Pointer Sisters, accompanied by a generous number of mp3s: http://lilmikesf.blogspot.com/2006/04/june-pointer-bore-surfing-barraging.html.
**Head over to The Rap Up to read more about Proof''s death, and a few of his tracks are also available for download: http://therapup.blogspot.com/2006/04/remembering-proof.html.

In some circles, Lupe Fiasco appears to be hip-hop's man of the hour. Here are just a few places where you can learn more about him, and cop some mp3s:
"Trials and Tribulations" and "Glory" are available at Nah Right:
http://nahright.com/news/2006/04/14/lupe-fiasco-trials-and-tribulations/.
Ear Fuzz has posted three joints from the mixtape Fahrenheit 1-15 Vol. 2/3: http://www.earfuzz.com/2006/04/guess-whos-on-third.html.
At Miblog Weighs A Ton, you can download the Fort Minor mixtape joint "Spray Paint", which featured Lupe and Ghostface. Speaking of Ghost, you can link to a crazy number of his mp3s by checking out this same post. As Nordy points out, he's one of today's most "overblogged" artists, being mentioned at least as often as Mr. Fiasco, Gnarls Barkley, Cam'ron, and T.I. : http://miblogweighsaton.blogspot.com/2006/04/over-blogged-artists-ghostface-killah.html.

Palms Out Sounds just posted their best Sample Wednesday ever, featuring a wide selection of songs by David Axelrod. I've talked about his work on this very blog, but most heads interested in jazz/funk/soul recordings, and/or the production side of hip-hop, have undoubtedly heard his name from a variety of different sources. His musical vision has been reflected in the work of such artists as Madlib, DJ Shadow, Dr. Dre, Pete Rock, Lauryn Hill, Showbiz & AG, and The Beatnuts, and that's just a few: http://palmsout.blogspot.com/2006/04/sample-wednesday-5-david-axelrod.html.

Yet another Candi Staton track is available for download---"Sure As Sin". I personally like this song better than the one I linked last time. Get your hands on this track via Captain's Crate (see post on 4/12):
http://bywayof.net/captains_crate.html.

The tracks on Aceyalone's latest LP, Magnificent City, will soon be released as instrumentals. As many of you know by now, RJD2 is the mastermind behind the music on the album. Download the instrumental version of "Heaven" at Scissorkick:
http://www.scissorkick.com/2006/04/rjd2-instrumentals_12.html.

Havas has updated A Three Minute Record with a variety of songs by artists/groups starting with the letters E and F. Download joints by Eazy E, Eric B & Rakim, El Da Sensai, The Furious Five, and more. E is here: http://athreeminuterecord.com/2006/04/contracts-and-all-that.html, and F is there: http://athreeminuterecord.com/2006/04/giving-you-all-big-f.html.

I happened to mention the legacy of O.V. Wright in a post recently, and was pleasantly surprised to see that an excellent selection of his songs was posted over at Soul Sides. Also, gratitude to Oliver Wang for keeping Souled On's link on his blogroll. Truly an honor: http://soul-sides.com/2006/04/ov-wright-at-nucleus-of-soul.html.

Still fiendin' for some fresh music by The Coup? Pardon My Freedom is featuring "My Favorite Mutiny" w/ Black Thought and Talib Kweli, a song that was leaked several months ago. You can also download "We Are the Ones", which has received considerably less circulation up to this point: http://pardonmyfreedom.blogspot.com/2006/04/weapon-of-choice.html.

A couple of nice hip-hop joints are up at No Frontin'. Check Madlib's remix of "Car Horn" by Common, as well as "Sing It Shitface" by Edan: http://songz.blogspot.com/2006/04/brown-university-spring-weekend-2006.html.

Spine Magazine is always worth a visit, but make sure you don't sleep on "I Got Rhythm (Take the Lead Mix)" (Lena Horne + Q-Tip). This mp3 was one of the links posted there on 4/11:
http://www.spinemagazine.com/index.php?task=.

Ear Fuzz blessed us with a couple of stellar joints by The Chambers Brothers---"When The Evening Comes" and "New Generation":
http://www.earfuzz.com/2006/04/real-soul-brothers.html.

Download "These Arms of Mine" by Otis Redding at People Of Paper: http://peopleofpaper.blogspot.com/2006/04/lost-recap_13.html.

Finally, I've said it before, but diss tracks don't generally interest me that much one way or another. As an exception, I rather enjoy "Shots Fired", another musical bullet aimed squarely at the dome of 50 Cent. I can't specifically justify why this Jadakiss and Styles P joint is any better than the rest, but the beats are definitely part of its formula for success. Cop the mp3 at The Rap Up: http://therapup.blogspot.com/2006/04/soundbites-shots-fired-by-jadakiss.html.

Parting words provided by Chuck D:
"I think goverments are the cancer of civilization"...
Posted by Scholar at 1:06 AM

Anonymous...thank you for your kind words. Since this is largely a thankless endeavor, it's always nice to get a little feedback.

I'm ghost before this turns into something like a counseling session.