Time Changed (But It Feels The Same) 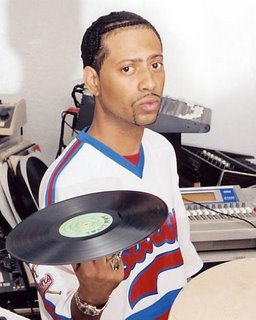 Takin' it back to the essence...

For some incomprehensible reason, I just can't front on T.I. anymore. I still don't think that he's a lyrical genius by any stretch of the imagination, but I'm definitely not mad about anything he's been putting out lately. You can download "I'm Talking To You" and "The King's Back" at Am I High? Both tracks are produced by Just Blaze, which is one more reason not to to sleep:
http://amihigh.blogspot.com/2006/03/king-is-back.html.

Headfonehaus returned from a brief hiatus with a very eclectic mix of mp3s for your listening pleasure. If nothing else, get your disco love thang on with "Somethin' Bout Cha" by Millie Jackson:
http://headfonehaus.blogspot.com/.

I generally can't resist linking to posts about Cee-lo Green, and today is no exception. At Captain's Crate, you can download a few of his solo joints, as well as a couple of tracks from St. Elsewhere (the upcoming Gnarls Barkley LP): http://www.bywayof.net/captains_crate.html.

One of my favorite old school reggae joints is "Funky Kingston" by Toots & The Maytals---download it at 2 Minutes Of Bliss 2. While you're there, don't hesitate to check out "Sliced Tomatoes" by Just Brothers (an absolute classic):
http://twominbliss.blogspot.com/.

Diddy Wah recently posted a few Bobby Womack mp3s---including his cover versions of "California Dreamin'" and "All Along the Watchtower": http://diddywah.blogspot.com/.

Download "Give Me A Try" by Sizzla at lemon-red. I wasn't even interested in hearing this at first, but the title is just so damn convincing:
http://www.lemon-red.org/blog/2006/03/21/kalonji/.

Ear Fuzz posted two songs by Marva Whitney. Lyn Collins tends to be my favorite Soul Sister, but "You Got To Have A Job" (w/ James Brown) is un-fucking-deniable:
http://www.earfuzz.com/2006/03/you-dont-work-you-dont-eat.html.
Marva, Lyn, and Vicki Anderson too often fail to get props for their profound influence on soul and hip-hop music. Read more about their priceless contributions here: http://www.funky-stuff.com/Divas/Index.htm.

Two Nat King Cole songs are at Filthy Choice---the Japanese version of "L.O.V.E.", and "You're Looking At Me": http://filthychoice.blogspot.com/2006/03/blame-it-on-my-youth.html.

The last mp3 I'm posting a link to is a bit of a curveball---"Loveless" by Lloyd Cole: http://fastbacker.blogspot.com/ (see the 3/20 post).
I'm guessing that this song won't be palatable to the majority of my readers, but fuck it---I do this in honor of a friend who's doing time in federal prison on some ridiculous bullshit. She blessed me with her entire record collection before she left a couple of years ago, and as a result, I now own a truckload of Lloyd Cole on vinyl. Peace, Deb...

I never promised to be an art critic, so don't expect a pretentious essay on the artistic merit of works by Charles Bibbs. That would suck for both of us---trust me. I'll sum things up in three simple words---the man's incredible. A lot of his paintings, as well as a brief bio, can be viewed at The Collection Shop. Get yourself some culture, bitches:
http://www.thecollectionshop.com/Charles_Bibbs_Art_Collection.asp?Affiliate=96.

This amuses me because I can relate all too well---"Parallels Between My Living Through Two Years of Middle School and the Two Terms of the Bush Presidency": http://www.mcsweeneys.net/2006/3/21wayne.html.

Remember in an earlier post when I suggested blaming Tom Cruise for the fact that Isaac Hayes quit "South Park"? I don't know when this aired, but I think I've finally tapped into my psychic abilities. Peep this clip from Jimmy Kimmel's show:
http://www.i-am-bored.com/bored_link.cfm?link_id=16530.

It's now been scientifically proven that whiny children grow up to be conservative pricks:
http://www.npr.org/templates/story/story.php?storyId=5293039.

How truly fuckin' amazing...
Posted by Scholar at 8:38 PM

Yeah, as much as I hate on made rappers nowadays, I can't hate on T.I..

Humanity---I'm embarrassed that I haven't come across your blog until now. Respect.

"Dilated Choonz posted "Blue Lines", one of the few reasons why I still love Massive Attack. They've kinda sucked for years now, but who can forget a first impression?"

blasphemy. but as usual thanks for the mention. you compile the best - best of - music blogging reports around. i wont front.

Haldan---funny that you called my Massive comment blasphemy, because I actually thought about you after I typed that. I know that you're a fan of their stuff. If I'm being honest, I was with them through Mezzanine, but we all know that I'm not worth taking seriously much of the time. My tongue is firmly planted in my cheek. Thanks for not frontin' on me, even though I'm a complete wise-ass...

lol, i'ma front muhfucka, what? what?!

Haldan---lol...you is crazy. I'm going to listen to "Live With Me" 436 times as my penance. Hopefully that will suffice...