I've Seen Sunny Days That I Thought Would Never End 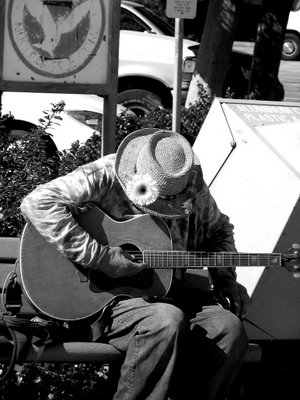 This funky lil' sonic freakout is one of many outstanding tracks from Harold Alexander's legendary Sunshine Man LP. I haven't encountered very many musicians who can masterfully play a flute and make bizarre vocalizations through it at the same time---have you??? Throw in some schizophrenic scatting over a jazzy, soulful groove, and you have one extremely essential recording. If you've heard DJ Shadow and Cut Chemist's Product Placement LP, or "Deep In The Jungle" by Blackalicious, you will undoubtedly recall hearing elements of this song in the mix...

This remix is absolutely bananas. If this doesn't make you snap your neck, then something must be broken...

This track is from the mixtape Talib Kweli Presents Blacksmith The Movement, an effort aimed at drumming up some hype for the artists on his record label. As a whole, the release has some distinct low points, but this particular joint is pretty unfuckwitable. It didn't necessarily stand out at first, but this track became an undeniable favorite upon repeated listens. "This is something you're going to be able to pass down to your babies..."

This James Taylor song has inspired cover versions by a relatively diverse array of musicians, including Cher, John Denver, Herb Alpert, Lou Rawls, The Isley Brothers, and Skeeter Davis. I've always been intrigued by the lyrics on the track, but something about Taylor's folky, turtlenecked, lukewarm delivery made the song come across as sappier than it really needed to be. Taylor wrote this song while battling with depression and drug addiction, so a hint of melancholy is to be expected, but Womack's rendition takes the cake because it doesn't make me feel like I'm riding in an elevator. He rescued this track from its "adult contemporary" and "easy listening" status by bringing out the soul that was lying patiently beneath the surface...

I put a lot of heart into these selections, so enjoy. Just some early Christmas presents for my peoples and all.

I know that some of you have your eye out for a new links post. I'll definitely get around to it, but it's a must that I do some partying for the sake of the season. It takes a lot of time to coordinate and prepare for one of those posts, and I don't fuckin' feel like doing it right now ;) More stuff from the crates coming very soon, though...

I hadn't known of that Bobby Womack cover before... big ups for the discovery.

Rahsaan Roland Kirk is the only other one I can think of (for the flute and vocals thing). He does an incredible cover of "Ain't No Sunshine," where he plays the melody and kinda sings the lyrics at the same time.

whoa! that Harold Alexander cut is crazy! thank, i've never heard that in it's entirety.

really great treats here. especially that Harold Alexander, which i'd not heard before.

And while i of course have heard the orig of "Fire and Rain," i never really listened to it because, you know, it's James Taylor. But that Womack cover is an ear opener. thanks.

p.s. happy holidays and all that jazz

Yeah, I'm trying to get my "Oldies" knowledge in order and that Harold Alexander is NUTS! Good looking out!

Happy Holidays man, have a good one!

flood---Thanks for the props. If you're interested, that track is from Bobby Womack's Communication LP. Should have put that info. in the post.

Travis, Matt, and j---
Gratitude---it's good to know that there are other heads out there who get as enthusiastic about great music as I do. Even better that it comes from people whose taste I truly respect...

To all of my readers---Happy Holidays! Thanks for making 2006 a great year for Souled On. Keep hangin' with me in '07---got lots more gems in the arsenal for ya!