Beneath The Planet Of Funky 16 Corners

I have something truly out of this world for you today, soul children---and I mean that both literally and figuratively. I'm not exaggerating in the least when I say that most of us who run funk and soul blogs are in some way a disciple or direct descendent of Larry Grogan. In fact, it's a must that all cyberspace crate diggers eventually make a pilgrimage to his vinyl mecca, otherwise known as the Funky 16 Corners. I'm honored to present this exceptional mix that he put together for us, accompanied by a commentary that reveals his wisdom and insight on every single track. Put on your space boots, kids...Larry is about to take you to a whole different plane...Scholar 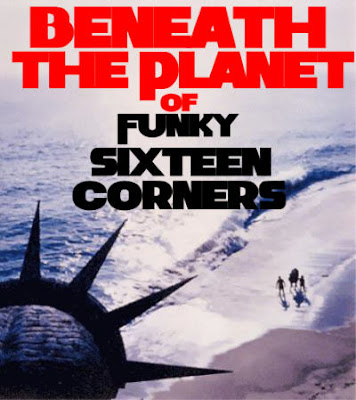 Download:
Beneath The Planet Of Funky 16 Corners Mix (mp3)

Not long ago your host, Scholar invited me to whip something up for presentation herein, and the mix you’re downloading/listening to is it.

If you’re familiar with the Funky16Corners blog, you already know that I have a thing for themed mixes. However, when I work with a theme, it’s more often than not based in a particular musical style or region. This time out, the theme is more of a vibe, wrapped in a feeling, encapsulated in a mood. Naturally I did this by using an audio framing device that had little or nothing to do with the music in the mix, though a slightly deeper examination may reveal an underlying thread of unease, actually present in the audio clips, merely suggested in the feeling of the music. It’s not going to jump up and poke you in the eye, but if you allow yourself to get inside and roll with it, all will be revealed.

Things get started with one of my favorite obscure Hammond sides, ‘On the Way’ by Bobby Cook and the Explosions. The tune creeps along at fairly slow pace, yet manages to remain quite intense, with some great shots from the drummer and very heavy Hammond sound.

Dorothy Ashby’s ‘Soul Vibrations’ is a truly remarkable record, sounding at times like the theme from ‘The Invasion of the Soul Martians’. The whole thing is a groove, but the last 15 or so second are absolutely sublime.

The next cut is a moody slice of mid 60’s Detroit soul, in which the sadly underappreciated Pat Lewis (her ‘No One To Love’, also on Solid Hit is no less than brilliant), wraps her pipes around ‘I’ll Wait’, originally a Parliaments b-side. Though I dig the original, the more I listen to Pat work it on out, the closer her recording gets to the top of the list.

Art Butler is kind of a mystery artist, in that I’ve never really been able to nail down any solid info on him. He may or may not be the same cat that recorded/arranged a bunch of soundtracks as "Artie Butler", but I can’t say for sure. His cover of Bobbie Gentry’s ‘Ode to Billie Joe’ appeared on the flip of his smoking Hammond funker ‘Soul Brother’. On ‘Ode…’ Butler uses an unusual organ sound, as well as a quirky, repeated bass figure that does justice to the spooky vibe of the original.

Surely I can’t be the only one here who thinks that ‘Do It (Til You’re Satisfied)’ by BT Express is one of the great records of the 70’s. This 45 rip may not have the epic breadth of the Tom Moulton LP mix, but it’s still a killer. The tune – one long associated with the early days of the disco era, yet hardly disco in any measurable way – from it’s string and harp flourishes, to it’s falsetto leaps sounds every bit inspired by Norman Whitfield-era Temptations (and is worthy of the comparison).

As far as I’ve been able to tell, the Rhine Oaks were actually Allen Toussaint, a Meter or two and sundry other New Orleans session heads. ‘Tampin’ is a brilliantly understated instrumental, possessed of a slow, syrupy funk dressed with bits and pieces of wah-wahed out guitar. It’s worth the ride if only for Toussaint’s echoey clavinet.

Junior Parker’s take on the Beatles ‘Tomorrow Never Knows’ completely recasts the lysergic panorama of the original in stark terms. It’s a record I only became aware of earlier this year, and it quickly became a favorite, sounding like a distant cousin to Blind Willie Johnson’s epic ‘Dark Was the Night’. There are those that have ridden the psychedelic bus that will assure you that Junior’s approach is a lot closer to the heart of the experience than the reverse tape satori of the Beatles.

Speaking of the Temptations, dig the Pioneers reggae-fication of ‘Papa was a Rolling Stone’. The group tightens up the groove, with the guitar chanking along under their harmonies, along with some great organ and electric piano, and even a soprano sax solo in the beginning.

Willie West recorded a number of 45s for Allen Toussaint-related labels through the 60’s, but the only certified classic in the bunch is ‘Fairchild’. In the late 60’s Toussaint made a number of arrangements that featured the acoustic guitar prominently, and ‘Fairchild’ is the best. There’s a somewhat darker, unreleased (on vinyl) mix of the tune – with the horn section removed - on Grapevine’s ‘Crescent City Funk’ comp.

The early 70’s recordings of Shuggie Otis have experienced a resurgence since their reissue on David Byrne’s Luaka Bop label. Though the Brothers Johnson had a huge hit with their cover of ‘Strawberry Letter 23’, I’ve always preferred Shuggie’s original, which has a slightly more laid back vibe.

Marlena Shaw recorded some great stuff with Richard Evans for the Cadet label in the late 60’s. Though her cover of ‘California Soul’ (the one with the Brainfreeze break) is better known, her ‘Woman of the Ghetto’ is much darker, politically tinged epic. The record features several Evans' trademarks, including the kalimba, heavy bass and drums and even harmonica flourishes. A heavy, HEAVY record.

Winston Wright was one of the most prolific reggae organists of his day (that’s him on the Harry J All Stars classic ‘Liquidator’), and his cover of Booker T and the MGs ‘Heads or Tails’ takes the Memphis heat of the original and spaces it out a bit. I especially dig the deep, deep reverb on the organ.

The mix closes out with another Booker T cover, coincidentally also in a reggae style, this time with Jackie Mittoo's slightly psyched out take on ‘Hip Hug Her’ (retitled ‘Hip Hug’). Winston Wright may have been a busy man, but the prolific (and influential) Mittoo made him look like a piker. If you get a chance to grab the LP from which it hails ‘Evening Time’ do so, as it’s a killer.

That all said, soak up the mix, give it a listen or two, or three. I hope you dig it.

The only people for me are the mad ones, the ones who are mad to live, mad to talk, mad to be saved, desirous of everything at the same time, the ones who never yawn or say a commonplace thing, but burn, burn, burn like fabulous yellow roman candles exploding like spiders across the stars...Jack Kerouac
Posted by Scholar at 12:29 PM

Just came across your website. This has been the highlight of my week.

Carry on the good work

Larry comes up trumps again, great suff. Jackie Mittoo can do no wrong.

Great post! Had the opportunity to listen to this mix while sitting at my computer at work...Just what a sister needed to get through the morning without bullshit, but real shit...this mix was dope and hype.

hi scholar... this is a very laid back selection from larry... but nonetheless great as always... this man's crates must be endless... keep up the good work... mike

now wait, seriously. can't believe it man, huge strong stuff in here!
wow. just discovered it, sure be back every day!
tom

Larry as always! That Dorothy Ashby tune is unbelieveable..

That is one smooth, smoky, mellow medley of underground funk - Keep ‘em comin F16 and SOM