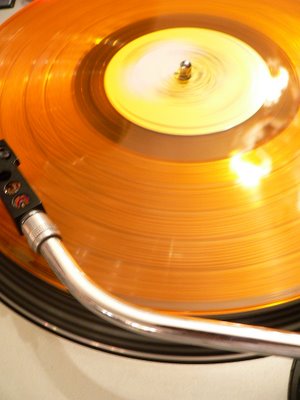 You've probably been holding your breath for long enough now, so here are those links that I promised you a few days ago:

Matt at los amigos de durutti recently did a post featuring the magnificent Sun Ra. If for some reason this man's career has entirely escaped you, I can honestly say that you are missing out on one of the most colorful and ingeniously bizarre characters to ever grace the pages of music history. He claimed that he was born on Saturn, and that is perhaps the only available explanation for his legendary eccentricities. I wrote a post about him last summer, but for all intents and purposes, it sucked pretty badly. The best thing that came out of that particular waste of cyberspace was a fairly stupid crack on Kenny G's afro-mullet. Pitiful.

At any rate, the curious can seek more worthwhile information about this "brother from another planet" here and here. And just so you get the full effect, I'm throwing a couple of video links into the mix:

"Astro-Black" (clip from " A Joyful Noise"---a documentary about Sun Ra and his Arkestra.

Clip from the 1959 film "The Cry Of Jazz", featuring Sun Ra before he went and got all avant-garde with it. Quite an interesting piece of musical and cinematic history.

Joey at Straight Bangin' started off the week with some amusing commentary on the current state of hip-hop. Also included in the post are some fresh joints you can cop by Raekwon, Snoop and Dr. Dre, AZ, KRS-One, and Jay-Z.

Speaking of Hova, Berkeley Place recently featured the A to Z of Jay-Z. Even if you've been down with Jigga since Reasonable Doubt, you may still find a remix or rarity that you can add to your collection.

In case you were wondering, I don't think that Kingdom Come lives up to its lofty title---a lot of it downright sucks. Everyone knows I'm a shameless Jay-Z fan, but I'm not fuckin' hard of hearing, son. That's strictly confidential, however...let's keep that one between you and me...

At Gorilla vs. Bear, you can download an excellent version of "The Weight" by The Band, as covered by The Rotary Connection and Minnie Riperton.

If you missed Aries Spears' freestyle on the Live 105 Morning Show, peep this video of him impersonating LL Cool J, Snoop, DMX, and Jigga Man.

Fans of soul/ R&B singer Betty Everett can acquire the track "I Can't Hear You" by way of Tuwa's Shanty.

Hilarious footage from "The Colbert Report" about the "Republican Revolution" from 1994 through 2006.

This is definitely not for "soul purists" (if there is such a thing)---the rest of you, however, may find it somewhat entertaining. Quarterbar (?) remixed 4 classic Motown tracks by Diana Ross & The Supremes, Jimmy Ruffin, The Four Tops, and Smokey Robinson & The Miracles. Visit sneakmove to download the mixes, but go into this knowing that "these are not hip-hop beats. They're more on the melancholy folk rock tip". That statement alone should make you absolutely certain whether or not you want to have anything to do with these remixes...

At This Is Tomorrow, you can cop "He Cuts So Fresh" (Marley Marl), "Uptown Is Kickin' It" by The Uptown Crew, as well as some other mp3s by The Whitefield Brothers, Detroit Sex Machines, and Shamek Farrah. Included in the same post is "Hula Rock" by The Lew Howard All Stars, a track that was sampled for Madvillain's "Meat Grinder". Additionally, this post features songs that have been sampled in joints by Dr. Dre, DJ Premier, Wu-Tang, Pete Rock, De La Soul, and more. Hit that link to download songs by The Blackbyrds, Ernie Hines, Joe Simon, The Charmels, The Mad Lads, and William Bell.

More sample madness can be found at The Revolution Will Not Be Televised. This post contains quite a few classic tracks that have been used as ingredients in various hip-hop joints. Download mp3s by Curtis Mayfield, Leon Haywood, Kool In The Gang, Ohio Players, The Commodores, Kim Weston, and more. Also, don't overlook the post that featured songs sampled by J Dilla. Through that link you can score tracks by Billy Paul, Eddie Kendricks, Minnie Riperton, James Brown, and more.

Speaking of The Godfather of Soul, you should definitely add "Hot (I Need To Be Loved)" to your collection---cop it now at Dilated Choonz. Eclectic music listeners may recognize the funk riff from David Bowie's "Fame" in this joint. Apparently, there's some dispute as to who wrote the music first. Drop knowledge if you know something that would help resolve the debate.

Lots of impoverished children will be very disappointed this year when they find out that they won't be scoring any of those talking Jesus dolls. Doesn't every kid want one of those?

33 Jones is featuring two Clipse tracks from DJ Rascal's mixtape This Is So Serious Vol. 5---"Where You Been" and "Double Down" w/ Vybz Cartel.

A new Nas joint is available at Rebel To America---"Blood Diamond".

Cop "Biological Speculation" by Funkadelic at Charles Bronson VS God.

Visit Palms Out Sounds to download more mp3s by El Michels Affair. One track is a live version of "Glaciers of Ice" that they performed w/ Wu-Tang Clan. The other track is their cover version of another Wu classic, "Bring Da Ruckus".

Last, but never least, Boogs posted a few Large Professor joints over at The Sole Life. Don't sleep---dude has some excellent taste in hip-hop.

"Confession is always weakness. The grave soul keeps its own secrets, and takes its own punishment in silence."---Dorothy Dix

Random thought interlude---every single source I've read for this quote says "grave soul", but sometimes I get stoned and ponder whether or not "brave soul" would have been more contextually appropriate. Deep...
Posted by Scholar at 7:39 PM

That version of Glaciers of Ice with El Michels is amazing. TruthAndSoul has a live performance that you can stream --> http://www.truthandsoulrecords.com/_lib/media/audio/sxsw_el_michels/WuTang_El_Michels_SXSW.m3u

Quarterbar recently put out a disco remix of one of Rakim's songs that was pretty good. I can try to dig it up if you're interested.

Well, I screwed up that link to TruthAndSoul. Lemme try that again:

Amazing post, it's going to take me a couple hours to go through all that shit. Right now I'm about to get my McDonald's errrr, Jay Z on. I usually like his un-released stuff.

Still trying to get my learn on with sample sources so thanks for any linkage there.....

yeah, i'm still hung up on the jay-z ish. fucking addicted to the 1st single, just because it is so damn catchy, but the rest is taking some time to sink in... which is never a good sign for the "saviour of hip-hop".

El Michels Affair is pretty ill man, I love the freshness the bring to those cuts....

I love your blog, when you get a chance check out my new blog: http://soundxperiment.blogspot.com/

Fresh---Rakim + disco sounds pretty unbearable, but I'd still love to hear that Quarterbar mix. Gratitude for the El Michels link.

Travis---I prefer Jay's unreleased material, too, and I feel the same way about Nas. Get your McDonald's on without regret. Even the most serious haters have a Big Mac attack every now and then.

JT---I don't think I'll try to start digesting Jay's record for quite a while. It hasn't made a great impression on me yet, but it's impossible to judge it fairly and objectively right now. There's been so much hype, and it's an awful lot of weight on one guy to save an entire musical genre.

Kola---appreciate the respect. I got to check out your blog for a few minutes, but I plan to visit again soon. Anyone who posts about Nina Simone is automatically a'ight with me.

thanks for the shout! much appreciated. oh, and i finally got around to that Linton Kwesi Johnson post.

Matt---the LKJ post was perfection. And thanks for the return favor. Be easy...