Forget The Half-Steppers...Eject The Rest 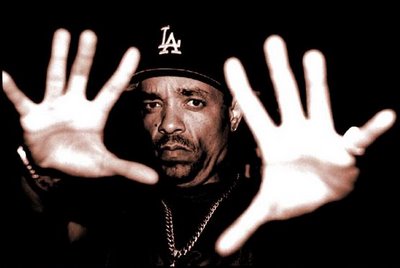 Remember when Ice-T was seriously gangsta...at least on wax? Yeah...me neither. I'm pretty sure I was still dead back then. In fact, I don't even think my grandparents had met yet when the Original Gangster (O.G.) was bangin' and creating havoc in the streets. As an old school MC, he was in the company of artists and crews such as NWA, Kool G Rap, Public Enemy, and Too $hort. For quite some time, however, he's been more likely to be mentioned in the same breath as considerably less thuggish types---I'm talkin' Benjamin Bratt, Jerry Orbach, and Dan Florek. These days, he's definitely more cop than cop killer---nah'm sayin'?

Anyway, please don't start cryin' like a bitch. I may be a sarcastic asshole, but I do know a hip-hop legend when I see one. Your mama may have been wearin' Pampers when he dropped his last hot record, but damn it...Ice-T still deserves props for his undeniable contribution to the history of rap music. Here at Souled On, the architects are given the utmost respect. With that spirit of nostalgia fully intact, go forth and:

***Head over to Eric's Archives to download Ice's classic joint "High Rollers". This track is from the era when listenin' to his shit was still "like jumpin' rope on a razorblade". It's one of several tracks posted from the Yo MTV Raps CD, which is ancient as fuck in 2006 (as hip-hop years go, anyway). You can also blow the dust off of a few other classics while you're there---reminisce on some shit by Stetsasonic, Kid N' Play, and Steady B: "You said it wasn't art, so now we gonna rip you apart.": http://ericsarchives.blogspot.com/2006/04/yothe-cd.html.

As far as payin' homage to the architects, we can dig even deeper into music's roots than that by checking out some classic soul/funk and R&B songs that have been sampled in contemporary hip-hop joints:

Ear Fuzz is featuring two songs by The Delfonics--"Trying To Make A Fool of Me" and "Ready Or Not (Can't Hide From Love)". The first of these two tracks was sampled on joints like Gang Starr's "Love Sick", "Gangster Beat 4 The Street" by Eazy-E, and "Gotta Have Money" by Ed OG. The latter of the two has been an even more popular sampling choice, providing the foundation for "Ready Or Not" by The Fugees, Diamond D's "Step To Me", "Bring It Right" by Afu-Ra, Missy Elliott's "Sock It To Me", and a host of other tracks that my blunted brain can't conjure at the moment: http://www.earfuzz.com/2006/04/super-philly-fonics.html.

Straight Bangin' also recently posted a few songs that have been resurrected for the sake of hip-hop. "I Can Sing A Rainbow/Love Is Blue" by The Dells was sampled on joints like "Shakey Dog"by Ghostface Killah, Prince Paul's "Open Your Mouth", and "Red Light" by the Smut Peddlers. "Special Lady" by Ray, Goodman & Brown inspired Da Brat's "Sittin' On Top Of The World" and "Black Woman" by the Jungle Brothers. "Cross Country" by Archie Whitewater is familiar to most hip-heads as the sample in Common's "Chapter 13", and was also used in an intro track by Akinyele. Finally, "You're A Big Girl Now" by The Stylistics had a fat-ass impact (pun intended) on the track "Big Girl" by Nasty Nas:
http://straightbangin.blogspot.com/2006/04/and-also.html.

As I've mentioned in previous posts, I think it's a crime of the male-dominated music industry that women often don't get their proper respect for their invaluable contributions to rap music. This is not only true of worthy female MCs, but also of the "soul sisters" whose records have provided essential ingredients for many of today's most celebrated hip-hop joints. I've already recently spoken on the neglectful oversight of Marva Whitney, Lyn Collins, and Vicki Anderson. Today, I'd like to go beyond the women who lived the majority of their careers in the shadows of the almighty James Brown, and pay tribute to a couple of other musical heroines:

Melba Moore's legacy includes her decades of work on television, radio, and Broadway. While she is a celebrity in her own right, she paid her dues performing backing vocals for artists such as Dionne Warwick, Ashford & Simpson, and Aretha Franklin. Hip-hop fans should recognize her song "Facade" in the Jadakiss joint "Gettin' It In":
Read more about Melba at Soul Tracks:
http://soultracks.com/melba_moore.htm.
Download her song "The Magic Touch" at 2 Minutes of Bliss 2:
http://twominbliss.blogspot.com/2006/04/lets-go-for-ride.html.

The second female in the spotlight today is Ann Peebles. Despite being born in St. Louis, Peebles would later come to represent the sound of Memphis soul. Her songs have been sampled on tracks by Wu-Tang Clan, Talib Kweli/DJ Hi-Tek, Missy Elliott, Busta Rhymes, and The Beatnuts:
Check out her Wickipedia page here: http://en.wikipedia.org/wiki/Ann_Peebles.
Download two of her songs---"I Still Love You" and "A Love Vibration" at Feel It: http://darcysfeelit.blogspot.com/2006/03/impromptu-catch.html.

Before I quit talking about sampling sources, I want to mention one more elder who deserves some respect---this time a brotha. OV Wright's songs have been mined numerous times for hip-hop tracks, especially joints by the Wu fam (Ghostface, Raekwon, Cappadonna, Meth & Redman, etc.). "Let's Straighten It Out" is just one of the many classic songs that he's recorded. It acted as the backbone for "America Is Dying Slowly", a widely slept-on joint by the Wu-Tang Clan:

Download Mr. Wright's version of "Let's Straighten It Out", as well as a worthy cover by Luther Kent at Tuwa's Shanty:
http://tuwa.blogspot.com/2006/04/roots-canal-guest-blog-luther-kent.html.
Stream a number of O.V.'s tracks, and read a brief bio here:
http://music.msn.com/artist/default.aspx?artist=116172.

Alright---since I've used way too many words already, the rest of this post will (hopefully) be all about economy of expression. Let's get brief...

Phish & Chips is featuring a couple of Blackalicious interviews (in mp3 format), accompanied by a few of their songs you can download:
http://phishnchipswsuw.blogspot.com/2006/04/blackalicious-sxsw-2006.html.

UK street artist Julian Beever has been trippin' out my third eye with his mind-boggling 3D chalk creations for a minute now. These images have definitely made their rounds throughout the internets, but just in case you really are the last to know:
http://www.rense.com/general67/street.htm.

I'm also guessing that by now you know that DJ Shadow's gone all crunk and shit. Can I Bring My Gat's got the mp3s to prove it:
http://www.abitnice.com/canibringmygat/.

Okay...so I've been droppin' Ghostface's name an awful lot lately. The only words I seem to have used more frequently in recent posts are "and", "the", and "by". Anyway, I can't help that another track by that guy is available for download---cop "Underwater" at The Rawking Refuses To Stop: http://rawkblog.blogspot.com/2006/04/reports-of-cmgs-demise.html.

One more thing about that guy before I proceed. As a general rule, I don't fuck with many forums. Occasionally you come across someone who has something intelligent to say, but more often than not, the stupid people prevail. This week, a lot of "geniuses" were pondering the meaning of the title of that guy's latest LP, Fishscale. Apparently the whole crack/cocaine theme of the album was lost on many of its listeners. To prevent this type of misunderstanding in the future, I'm linking a relatively useless resource, The Crack Slang Dictionary. Don't get it twisted. I'm not endorsing crack up in here, so don't go tellin' your daddy on me. I ain't intentionally smokin' nothin' that will make me look a fried, hot mess. However, I found myself somewhat intrigued when I came across this particular reference tool. Where I'm from, we don't call the crackity-crack "hamburger helper", "cat's pee" or "square time Bob". Shit's street educational, son. I'm just sayin'...
http://parentingteens.about.com/cs/cocainecrack/l/blsldiccrack.htm.

Cee-Lo Green has a new project called Lovestink (ugh) with Plantlife's Jack Splash. The "Gangsta Boogie" mp3 has been making
an appearance on a variety of different sites, but why not cop it via Gorilla vs. Bear? : http://gorillavsbear.blogspot.com/2006/04/weve-got-dance-called-be-yo-self.html.

Visit the most recent Catchdubs post (4/05) to link up with a mad variety of remixes, blends, mash-ups, etc: http://www.catchdubs.com/.

Some people have the audacity to wonder why I think that most conservatives are total pricks. Can I present Rush Limbaugh calling an alleged rape victim a "ho" as evidence? He and Bill O' Reilly must be having a secret competition to see who can be the biggest media fucktard:
http://mediamatters.org/items/200604030004.

So Much Silence posted an interview and mp3 by Doodlebug (aka Cee Knowledge). In case you didn't know, he's one-third of the holy trinity of Digable Planets: http://somuchsilence.blogspot.com/2006/04/qa-with-doodlebug-of-digable-planets.html.

Moistworks has a couple of remixes of "Callin' Out" by Lyrics Born available for free download:
http://www.moistworks.com/2006/04/callin-out-lyrics-reborn-remix-irah.html.

As I mentioned in my last post, the blogger formerly known as Treat Williams is now the mastermind behind A Three Minute Record. His latest post mentions Souled On in a way that is creative, intriguing, flattering...and weird. I expect nothing less from Havas. Dude is my muthafuckin' blogger hero and shit: http://athreeminuterecord.com/2006/04/spring-break-2006-my-dads-basement.html.

Trees Lounge returns from a moment of silence with 100 songs you can download about the state of Louisiana. Featured artists include Irma Thomas, Muddy Waters, The Neville Brothers, Lil' Wayne, Leadbelly, The Meters, and 94 others I don't have time to mention:
http://trees-lounge.blogspot.com/2006/04/50-states-louisiana.html.

I regret not linking this blog a lot sooner, but I never claimed to be Jesus---okay? Chasing Red is a very smart blog with an impeccable list of featured artists/mp3s. If you can appreciate music by Bill Withers, dead prez, Stevie Wonder, Alice Coltrane, Sonny Rollins, and/or Curtis Mayfield, this site should be part of your regular rotation: http://chasingred.livejournal.com/.

I also want to direct some traffic towards 33/45, an eclectic mp3 blog that has demonstrated some considerable potential. Check this recent post, featuring songs by Rasputin Stash, The Bar-Kays, and Rene & Angela:
http://threethreefourfive.blogspot.com/2006/04/dark-clouds-and-sun.html.

My fingers are all crippled and shit after typing for so long, but I can't sign off without thanking Free Hip-Hop Now for linking Souled On:
http://freehiphopnow.com/.

I sincerely appreciate all of the sites and blogs that have helped to increase my readership. Their support has definitely inspired me to keep this damn thing going. More importantly, it means that I haven't had to entertain any stupid ideas about how to attract a larger audience. Consequently, I have scrapped all plans to promote a "Tell Your Grandma About Souled On Day". For this, I think we can all be genuinely grateful...
Posted by Scholar at 10:37 PM

Holler Scholar. I visit at least 2 to 3 times a week. great blog and funny too. I'm shocked that more people don't thank u for puttin em on to diffrent shit. oh well I guess thats what I'm doing now. Told my grannie about the site too. she don't know a damn thing about the internet. tried though

hey thanks for the link. your site looks cool, I'll keep checkin' back. keep it up.

Are you exhausted from searching for bitcoin faucets?
Triple your claimed satoshis with this new BITCOIN FAUCET ROTATOR.

Did you think about picking the ultimate Bitcoin exchange company - YoBit.